Just recently I finished re-reading a book I picked up a few years back by fellow alternatehistory.com member Anaxagoras, otherwise known as Jeffery Evan Brooks, which is (if you haven't already guessed) an interesting take on an alternate ending for the American Civil War. Now, most Civil War novels will tend to focus on men like Robert E. Lee or Stonewall Jackson, the great commanders of the South, and even then they will largely focus on the events of 1862-63, with things like the battle of Antietam or Gettysburg and all of these become major war winning victories. This novel, does things a little differently.

Welcome to the world of Shattered Nation. 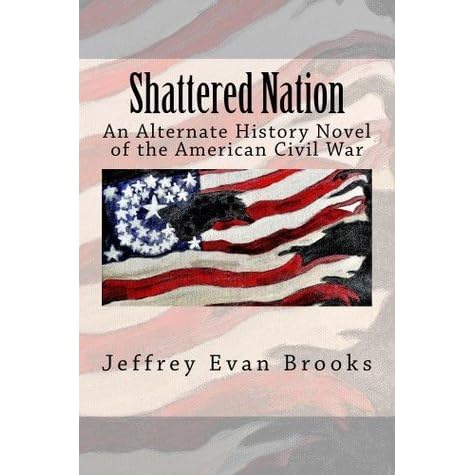 For starters it instead focuses on events in 1864 in the Western Theater rather than the East near the respective capitals of Washington and Richmond. Instead, we focus on the Atlanta Campaign where William Tecumseh Sherman and his three armies are converging in the seemingly doomed Confederate city of Atlanta and the Army of Tennessee under Joseph Johnston is struggling desperately to hold them. Those of you familiar with the Civil War (or Gone With the Wind for that matter) will remember how this turns out historically.

However, we get the Butterfly Effect in full force, and some small, seemingly insignificant changes mean that history changes quite a bit in the interim, all with a cunning plan of Johnston's to lure the Union to battle around Peachtree Creek.

Now I'm not going to give away anything to avoid spoilers, but I will give some details to peak your interest. For now let me sing the books praises.

The fact that Brooks has chosen to dedicate the novel to the events of 1864 rather than earlier in the war is an interesting one. As previously mentioned most novelists will focus on the more famous battles and commanders, like Harry Turtledove focusing on the East in his Southern Victory series, or even Newt Gingrich focusing on an alternate Battle of Gettysburg in Grant Comes East. Here though, we come to a South that is on its last legs. The blockade has worn it down, they have lost hundreds of miles of territory, and are completely cut off from the states west of the Mississippi. Economic problems plague the nation, and they hang on only by their finger nails with an ever shrinking army. In the North the Union seems to have found a stalemate in 1864, with bloody repulses in Grant's Overland Campaign, and Sherman's beating in pushing on Atlanta, as well as numerous failed attempts to take Charleston. This leads to war weariness as voters look towards the election of 1864 which Lincoln must plan for, which influences the military thinking to no small degree.

This leaves the outcome extremely in doubt, and keeps the reader guessing as to how things will turn out. The first third of the novel is largely the true historical narrative, running from the events of Kennesaw Mountain, to Pace's Ferry, before the true change kicks in and events start snowballing. This is a good move as it establishes the facts on the ground which lead to historical events, only for things to change gradually and slowly. The various military aspects, and the political factors, all pile up and are slowly influenced by the events in the novel itself. This allows for some wonderful suspense as you realize nothing is set in stone and events can go either way.

Brooks decision to focus on characters like Joseph Johnston, John B. Hood, George Thomas, and Patrick Cleburne, makes an appreciable change from events in most stories, even historical ones, which show the legendary Robert E. Lee, and Abraham Lincoln. However, he does include Lincoln (how could he not?) and Confederate President, Jefferson Davis, as characters. This is, in my opinion, an excellent move. Not only is it an excellent portrayal of the rigid, cantankerous Confederate President, but it provides an amazing contrast with Lincoln as a head of state. What is more impressive is that these characters feel real, they are not deified and glorified versions we imagine, but powerful, yet flawed, human beings. Vain, judgmental, presumptuous, and even law breaking, all are men who are doing what it takes to win, but who are held back by their very human flaws.

For instance, in the Southern lines the Army of Tennessee is plagued by jealousy, bitterness, and petty feuds which cause mistrust and insubordination amongst its commanding officers. Johnston and Davis hate one another which not only poisons their personal relationship, but at critical moments puts the military campaign in jeopardy. On the Northern side, Sherman slowly becomes nerve wracked by the campaign and begins to undermine his position with his own officers from nervous exhaustion. The Northern war effort is hampered by the Copperhead peace party who despise Lincoln and Emancipation, preferring to try and end the war by negotiation rather than through buckets of blood, they scheme to undermine Lincoln in every way possible, with slanderous news stories, and even total lies fabricated to make the administration look bad.

This leads to some well plotted and very well written political intrigues, which highlights one of Brooks strengths as a writer. He grasps the political levers in the period well, and has clearly done his research into the characters and events of the period, making it more believable when events start diverging from our own timeline.

There is even a ground pounders view of the action in the form of his fictional character, James McFadden of the 7th Texas Infantry Regiment. McFadden is a shell shocked veteran who has fought from the deserts of New Mexico, to the swamps of Tennessee, and has seen his fair share of war, becoming bitter and living only for killing the enemy. However, unexpected twists of fate allow him to grow as a character, and the chaos of battle give him a chance for glory.

The battle scenes are well written, though the sheer chaos of battle isn't fully grasped, the tactics, and formations are portrayed well and realistically, showing just what a battlefield of the Civil War would have looked like, not sparing us the descriptions of the blood, smoke and chaos.

Now for another thing the author doesn't stint on how brutal war can be. He portrays the South as committing war crimes, but doesn't exonerate the Union from some pretty egregious actions like shelling Atlanta, denuding the countryside, and even has another fictional Union character be a complete monster, so no side comes off as being 100% morally pure, which is refreshing.

It seems clear to me that Brooks strengths lie in his grasp of detail in characters. This makes scenes like political meetings and electoral campaign planning which might otherwise seem boring, interesting and dynamic, especially with flawed characters making blind predictions, or blatantly contradicting other viewpoints based on their limited information, which is always fun to read.

However, the book itself has a few flaws.

Brooks does not shy away from the brutality of slavery, or from the exact nature of the Confederacy, a nation which came into being solely to defend its peculiar institution. At the same time, it has men who fight for more "noble" reasons, such as loyalty to their particular states, a sense of Southern identity, and of course, simply taking up arms against an army they view as invaders.

That being said, the choice of characters being men who are not sympathetic to slavery does somewhat cast an apologist pall over things. The fictional character of McFadden for instance is a Scotch settler from the Texas frontier whose family held abolitionist views, and who carries no particular love for slavery. While this is probably a more sympathetic character, his more enlightened views on slaves seems to make the narrative lean backwards for a man who grew up in a society which was not overly friendly to black people in general. This to me is a bit of a problem since it removes a cultural flaw from McFadden that rings a little hollow for the time period. I might have found him more compelling were he at least neutral on the issue, or merely accepting of it as part of the Southern culture that exists. Men like Joseph Johnston and Patrick Cleburne are at least on record as being at the very least apathetic to the peculiar institution, but I think that there ought to have been a few more characters who were accepting or supportive of that plank of Southern society just to firmly ground the narrative.

McFadden himself almost veers into charactersue territory. That he is personally involved in one important event in the book which makes history is to be expected, two could be pushing things but acceptable, but taking place in three earth shaking historic events that shape history? It stretched my belief a little thin, but I could live with it. He is also just a little too humble for my tastes, despite being involved in things that would make all but the most exceptional men a touch bombastic. Though his backstory reads like something out of a Clint Eastern Western, I actually didn't mind that, as I'm hoping it will play an important role in the sequel.

However, the narrative has a tendency to hit you over the head with things. For all his skill with politics and dialogue, Brooks really lacked subtlety in this novel by repeating things much too often. For instance he would repeat the military situation numerous times and have plans and details repeated at least twice whenever they were given, which while arguably realistic, felt a little too heavy and perhaps leaning towards the scale of treating his readers like they had a short memory.

This can be useful, but I found I could easily remember that yes the election of 1864 is important, yes New York and Ohio are going to be political battlegrounds, and yes McFadden doesn't think much of slavery, yes Patrick Cleburne is Irish, yes Davis is prickly, Some points just don't bear repeating so often.

There is also the small instances where the outcome is preordained by meta narrative that I felt should have been excised from the novel as they did bugger the suspense for parts. Meta narrative does work in some instances, but here (save for pieces in the epilogue) it didn't add anything to the story.

Now I could criticize some events in the novel as really stretching historical believability, but in complete honesty, the way Brooks sets them up is so well done I can't bring myself to fault the one or two instances where my suspension of disbelief was pushed. The fact that no battle ever goes completely right and that his characters get hoodwinked is just so superbly for me to complain, it reads too well.

All in all, it is a very unique and entertaining read. To anyone who likes alternate history I would heartily recommend it as it diverges from the typical Civil War stories and takes us to events which we might not have thought about otherwise. I think it ought to be read by anyone who likes the genre.