I just had the absolute pleasure to watch the 2015 Canadian film Hyena Road. I have to say it was a spectacular movie, way more moving than the recent WW2 film Fury. It was, simply put, a masterful piece for a Canadian film. 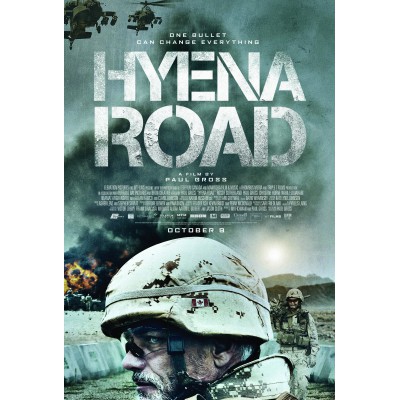 The film is set at an unspecified time during the War in Afghanistan and is a Canadian film written, produced, and directed by Paul Gross (of Passchendaele fame) which was a real treat to see. The story follows the tale of a sniper team as it secures a road (Hyena Road) being constructed deep into the heart of Taliban territory, while they come into contact with a mysterious Afghan elder known only as 'the Ghost' and in the process get neck deep into local conflicts that are raging all around them. Overlooking all is a wily cynical intelligence officer trying to see the big picture.

Hyena Road's story is masterfully done with each character getting an adequate amount of screen time, and it will constantly leave you guessing as to what happens next. The main characters are all fully fleshed out with supporting scenes, and the myriad of sub plots all roll together in a simply fascinating ending that leaves you literally on the edge of your seat. I really don't want to say too much about the story for fear of spoilers but suffice to say it is well done. There are a series of overarching stories which really come together in a big way at the end.

Our principle cast of characters leads with Paul Gross who plays the aforementioned intelligence officer whose voice over narration sets the stage for our setting and much of the overlying narrative. In the beginning we see the squad consisting of Ryan (Rossif Sutherland) Travis (Allan Hawco) Hickie (David Richmond-Peck) and Tank (Karl Campbell) caught in a dangerous mission which they must navigate out of using their wits and aid from NATO forces directed to them by Captain Jennifer (Christine Horne) whom Ryan is far more intimately involved with than regulations might allow. The mysterious tribal elder The Ghost is played by Neamat Arghandabi, who despite not speaking a single word of English in the film, is a force all his own merely by his presence.

My only complaint that I  might offer up regarding characterization is that the side characters were in need of a bit of fleshing out versus the main characters, but each is a joy to watch as witty and natural banter seems to flow right from the beginning to end whether it is from soldiers under fire or men and women in a non regulation relationship trying to show their feelings.

One of the nice things about this film is that it really is a love letter to the Canadian Forces, showing off professionalism and character, getting the military jargon down to a tee. At the same time it portrays them as human beings with flaws, conflicts, fears, and problems all their own; not attempting to white wash them or show them as incapable of making mistakes. You feel that these are real characters, serving in a real war in stressful situations who can live or die at any moment. The film really keeps you in a state of anxiety regarding the characters fates and I give it a real thumbs up for that.

While it also doesn't shy away from portraying soldiers as real people with flaws (and some very colorful vocabularies) it definitely doesn't shy away from violence. The film's opening scene is a teenaged boy burying an IED and receiving a fist sized hole through his chest for his troubles. The gore is realistic, and surprisingly it felt almost tasteful for how not over the top it was. Blood is shed, and many people die, but it isn't the point of the movie.

That being said, this isn't a Hollywood blockbuster. The production values show at times with some scenes being simply stock footage, but the editing tends to hide this well. There are some moments where it certainly doesn't do the film credit (such as really blatant insertions of real soldiers footage into scenes where it doesn't totally make sense) and some moments where the special effects aren't quite right, but that is forgivable.

Overall this is an excellent film. I have to admit it had me on the edge of my seat for much of the run time, which is a decent two hours. I would really encourage anyone who likes a good war film to go out and see it, especially if you're a Canadian. It's important to support local film efforts and this is a film that sincerely deserves that support.

So if you can, buckle your seatbelt and strap in for a trip down Hyena Road.
Posted by Stienberg at 08:42 2 comments: