Well readers here I being you another excellent review. I have given some glowing reviews of the works of author Matthew Quinn's work before. Here though I offer you the opportunity to enjoy all of Quinn's published works, as well as three new stories as yet seen by the world in one easy reading location.

I present to you, Flashing Steel and Flashing Fire! 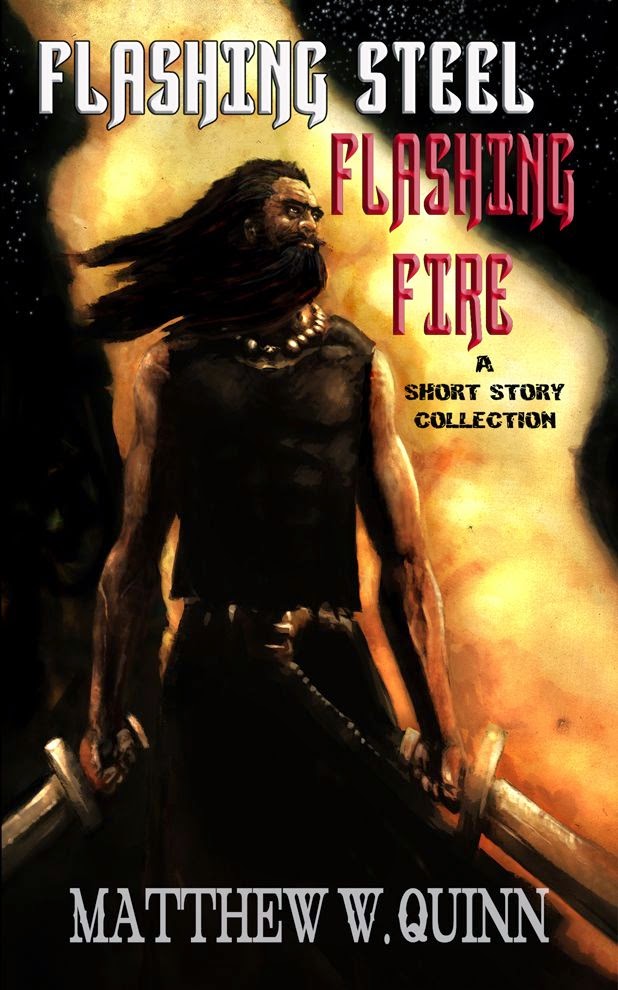 This is of course an anthology, making it one of Quinn's longest published works so far. I've reviewed some of the stories available in the publication already, so I think I'll just stick to talking about two of the stories contained herein.

The first new story I'd like to talk about is Nicor. Nicor is a sort of combination period piece combined with a horror story. Here we have the Vikings taking on an eerie mythological swamp beast in a battle to the death and they find their weapons and courage almost useless when fighting the beast. Its interesting as it's told through the POV of a young first time raider who has never been a-reaving before. His nervousness and uncertainty paint a vivid contrast to the experienced raiders he stands beside. With a fun twist at the end it's a delight.

Next we have Lord Giovanni's daughter. I have to admit that this one was the most difficult for me to read, not because it was a bad story, but because I have very little point of reference for the villainous reptilians who populated the story. Imagining them was difficult so it took me a while to properly get into it, but once I did we had the right amount of wit and creativity to make for a fascinating read!

The next new piece is the very interesting prologue to an aborted fantasy series called Lord of the Dolorous Tower. This one is interesting as it has a fascinating blend of post-apocalyptic fiction and high fantasy. The characters are essentially two lovable rogues from their village who go exploring an old tower. It offers some fascinating ground work for a world in which it is suffering from an asteroid strike. It deals with some fascinating magic and world building while giving us a great romp with these two explorers, though it is a wee bit dark I'll just say.

Finally we have the ending piece Westernmost Throne. It's a 'political' horror story which is fairly unique in and of itself. It follows the tale of a young political secretary who discovers she may be in just a tad over her head when her up and coming political boss turns out to be more than he seems... I won't say too much here as it needs to be read to be appreciated. This one certainly subverts expectations! I can say I quite enjoyed it and I think you will too!

Now that't it for all the new material, but it has a number of old favorites like Melon Heads and Illegal Aliens! If you've ever read any of Matthew Quinn's work before I highly recommend you pick this piece up! It's a fantastic anthology and as I've said before, Mr. Quinn does not disappoint.

So I heartily encourage you to go pick it up!
Posted by Stienberg at 22:20 No comments: