Well having dipped my toes into the world of Stephen King's Dark Tower in dead tree format, I decided to jump in and see the film version on the big screen. I came away both impressed, and disappointed. Why you may ask? Well join me now as we journey through Keystone Earth and out onto the many spokes of the Dark Tower, and through many worlds.

Jake Chambers dreams of a Tower which a sinister Man in Black hopes to destroy, he also dreams of a mysterious gunslinger who fights him. This leads to him being seen as crazy, but soon those dreams become all too real and he is caught up in a plot to save all worlds from being consumed by darkness and fire... 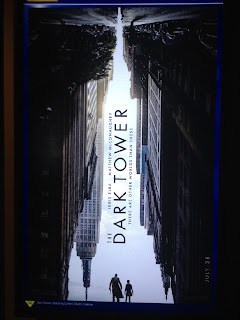 Before we delve too deeply into those matters of film itself, I just want to discuss the lead up to the film which would explain the problems with it. The movie starts off with a disappointing pre-film stage with development stretching back all the way to 2007. First a brief run with J. J. Abrams, who due to other constrains could not adopt the project, then a run from 2010-2015 with Ron Howard, and finally a fast track through 2016 with Nikolaj Arcel as writer and director. However, despite his work on the Swedish Girl With the Dragon Tattoo, you can see that his influence here was probably for the worst. That the final screenplay had no less than four writers should speak to why things are a bit of a mess.

That being said, it seems clear that there was a lot of mess to be cleaned up. According to Wiki they spent 6 million dollars on reshoots, and if this is the finished film with reshoots I have to shudder a little at what the original version was like. Overall the story, while familiar to anyone who has actually read the book series, is almost inaccessible beyond the bare bones to the average movie goer.

One of the biggest problems for this is the choice of focus for the story. Unlike the written series where the main character is Roland (the eponymous gunslinger) we are instead following the adventures of Jake Chambers, who in the original series is the sidekick of Roland. They have also changed around Jake Chambers backstory. In the books he is the son of a wealthy but negligent family, yet here he comes from an urban middle class family with an absent father, and he is being treated for "visions" due to the death of his original father. This seems like an odd choice (or at least one to tie him to Roland who also loses his father), but it is an overall weaker choice. Tom Taylor portrays the character well, but in all honesty he is nowhere near as interesting a character as Roland.

Idris Elba portrays Roland Deschaine to a T. He is an inspiring presence, and though I myself always pictured him as a timeless Clint Eastwood, this works very well. He has the right mannerisms, attitude, and pulls off all the amazing skills that I expected to see with a gunslinger. Unfortunately, he is a supporting character in what should be his own story, and his vocation, background, and overall story are not given the justice they deserve here. It is a real disappointment in the film, with little character being given to him beyond some small motivations that needed to be fleshed out more.

The surprising performance is that of Matthew McConaughey as The Man in Black. McConaughey is simply fantastic in this role, and though I personally always pictured The Man in Black as a Rasputin type figure, this worked out well. His affable and subtly menacing nature is simply enchanting. He captures the screen whenever he is there, and he shows off the villains pettiness, cruelty, and spiteful nature. Unfortunately, his motivations and methods are not suitably explored, and just why he is doing what he is doing seems almost random, and where he got his minions from is just something that is never addressed.

The supporting cast is good, given what little they have to work with. Claudia Kim is a surprisingly good portion of the movie as the Seer, who also possesses the "shine" which allows her to help Jake. The remainder are really just set piece characters who fill roles as the plot demands. It's a sign of the confused and scattered writing that comes through.

Plot wise its a tad predictable, but uses the wider King mythos in amusing ways. Shout outs to other King works abound, and iconography from the Dark Tower is present, with references to the "Crimson King" and other works like The Shinning, or IT, among others. The broader story is supposed to be a prequel to the book series at large, and does suffer a tad from trying to squish all the books broadly into one single confused volume devoid of context. This makes it a chore for the uninitiated who have random terms thrown at them which have no meaning, and the lack of true connectivity to the book series makes it frustrating for true fans and so arrives at an unhappy compromise.

The short run time is a big detriment to the film as important story points and necessary scenes and exposition are left out. Roland's backstory is gruesomely truncated (a failing of being unable to make him the main character) and even Jake seems a weaker character for simply having him seen as a "crazy" kid. There was much more that could (and should) have been explored, allowing more understanding of the world and the characters to be fit into the film.

These questions are (largely) answered in the books, but in the film they are all vague or unanswerable. The omission of these items is a big failing on the film's part, and quite frankly it should have been better handled.

On the plus side, the little details: the post apocalyptic nature of Roland's world, the haggard look of Jake and his mom, the effects on the two skins, the bandoleers, and the fast loading for Roland, that he never misses, the creatures, the many many medical problems Roland is told he has in the hospital, all go towards making a brilliant world.

The action scenes and the showcasing of the gunslingers abilities are epic, and the film could have used more of that. I think a flashback to the gunslingers last stand would have made for an epic piece of cinema. The score adds to this, and the magic of the Man in Black is fun to watch, and used to good effect.

Overall, the movie is largely a disappointment. In a good shout out to fellow blogger Matthew Quinn I recommend his review for a great insight on more specifics into what went wrong. Overall the movie is worth seeing at least once if you love the Dark Tower, but if you're a novice, don't dive in and see it.
Posted by Stienberg at 11:00