As a long time connoisseur of the zombie genre, I was pleased to discover a few months ago that we were supposed to be getting an ensemble, all star cast for a new zombie comedy The Dead Don't Die. Looking like a big homage to the tropes and fun of the best the zombie genre had to offer, its' trailer played well and had me hooked from the first time I saw it. Starring, Bill Murray, Adam Driver, Chloe Sevigny, Steve Buscemi, Tilda Swinton, Danny Glover and Selena Gomez, to name only a few! The cast is actually quite large and very likable, with what I thought were for sure going to be some stellar performances!

Did we get that? Well, we got something... 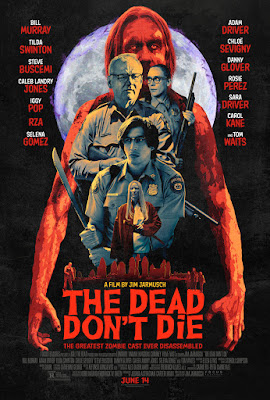 Set in the town of Centerville (A Nice Place) it follows the work of Sheriff Cliff Robertson (Murray), Ronnie (Driver) and Minerva "Mindy" (Sevigny) and others from the small town as they deal with some inexplicable changes caused by polar fracking. The day is longer, the moon emits a strange 'toxic' glow, and strange things are happening in the cemetery.

Robertson is first going after local Hermit Bob (Tom Waites) who Farmer Miller (Buscemi) has accused of stealing his chickens. We then have the the two policemen driving away and leaning very abruptly on the fourth wall when Ronnie comments that the song The Dead Don't Die, by Sturgill Simpson, is the theme song for the film after Robertson comments that it sounds very familiar. Get used to this song, this joke is gonna be overused a lot. There is a pretty cleverly done establishing shot done as the police cruiser goes by all the various locations we will be seeing as the film goes on.

The zombie weirdness begins one night as two 'coffee zombies' attack the diner and devour locals Fern and Lilly in a genuinely unsettling scene. It has some dark humor to it as the zombies recognize coffee and quit their mauling to ineptly swig some back before shuffling on. Now, these two zombies are played by Iggy Pop and Sara Driver, so you'd expect them to show up again. Other than a single scene where they are walking around with the coffee pots... they're kind of irrelevant.

Following this is an amusing sequence where we once again see some well done humor as a three part take with each police officer viewing the scene goes on. Then we finally get some delightful weirdness from Swinton's character Zelda as she wanders around in odd ways, speaks strangely (addressing people by their full names) and has jerky, almost planned moves when she isn't wielding her katana.

Next the zombies begin to follow in waves, and as the undead begin to slowly overwhelm the town. Madness ensues.

Something I should pause to praise is the zombies themselves. While they are the usual undead shamblers, the actors and extras who play them just dig into the roles and damn they do it well! And rather than big bloody sprays of gore, when the zombies are killed they instead shoot out these black dust clouds. It's a unique and very visually appealing touch that I think should be applauded.

From here we get intervening bits of well executed horror, some good bits of comedy, and a lot of flat jokes. Some of it is well executed, especially in the second act as I found myself laughing uproariously at Driver and Murray's banter with Sevigny, then Swinton just stole every scene she was in. But the first hour of the film tends to drag, with only a few well done jokes. Then the finale comes across as, well, confusing.

Now, past this cut there be spoilers, you have been warned. Sadly, it is almost impossible to do a good critique of the film without them. 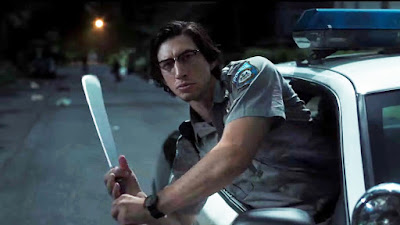 God alone knows how, but the producers managed to waste enough money to make three of these dumb movies. It took a small fortune to create these disasters, but it took them only an hour to drain my brain of any, even halfhearted, enthusiasm for watching this last film! As before, please check out the reviews of this film alongside my friend Andrew over at I Choose to Stand where he looks at all three like me!

After Part II bombed even more spectacularly than the first film, making less than a quarter of its stated budget back, the series seemed to be in some limbo for a while. There was even talk of optioning it for a musical (God wouldn't that have been annoying?) way back when. However, this fortunately (sadly?) did not come to pass and instead they did what they had done for the last two installments, scrapped the old cast and hired all new actors making things even more confusing for people.

In a now hilariously familiar story, the budget for this film was only half of its predecessors, with some 440,000$ of that being raised on Kickstarter. Really, this film should have been called Atlas Shrugged Part III: The Search For More Money. In should come as no surprise that from a budget of 5 million, the film made only 800,000$ back at the box office. Considering what this was, even in comparison to Part III of the book, there isn't any question of why it bombed even worse than it's predecessors. 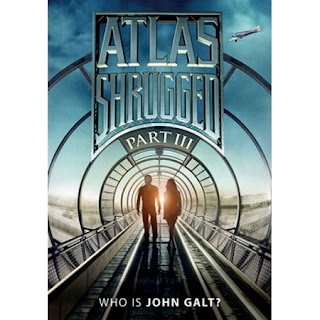 Now as someone who had read the book I will admit full disclosure to being interested to seeing Part III of this film series. It was, in themes, set pieces and story, very different from the first two parts which can be very well described as "business people talking business" with some bland mystery coloring the background.

Part III of the novel however, had one large section of ideological screed, followed by some rather entertaining pulpy action bits and the close up examination of society collapsing. Trains stop running, harvests are left to rot, and sections of the country break into open civil war. It's actually rather gripping stuff as we see the United States collapse into anarchy as part of the plan by the megalomaniacs heroes of the story.

So we come to Part II of this nonsense, and let me tell you it just gets sillier from here. If you have missed it, my friend and fellow blogger Andrew Cowie has also done a review for this film over on his blog I Choose to Stand and it is well worth reading!

After the first installment of the Atlas Shrugged trilogy bombed fantastically. The idiots Randian heroes who had made this film decided rather than let the free market do the talking as their own philosophy would compel them to do, they were going to double down on their idea and decided the world must learn of the brilliance of their prophet's ideology.

The only problem was that now, after making less than a quarter of their budget back from the first film, the plan of financing it with profits was no longer feasible. The strategy? Hire an all new cast because keeping actors is expensive! Well, there was also a massive debt sale in order to keep the film afloat, and a big investment of personal funds. Apparently this film, when you tally up marketing and everything, cost as much as the first one. If that was the case oh boy did it have problems.

It seems that the other portion of the plan was to stoke the public's expectations by keeping it from being screened by critics pre-release so everyone would have to be surprised and appalled at the same time. This fantastically misleading article from Fox News in 2012 has the producer John Aglialoro stating "The integrity of the critics are going off a cliff...Why should I give them the sword and they are just going to use to decapitate me with?" The article of course blames the 'Liberal Media' for casting the movie down, but as a National Post review of Part I by Peter Foster notes: "Still, if it sinks without trace, its backers should at least be proud that they lost their own money."

Turns out, the film wasn't proud with just losing its own money, it didn't even need to give anyone else the sword to decapitate itself! The film made even less money than the first, and received an even lower rating from critics and audiences alike! 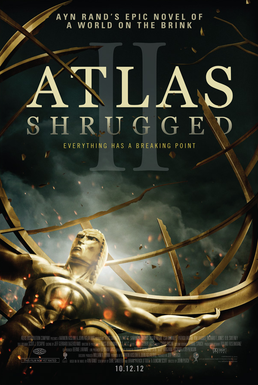 Years and years ago, my teen self made a monumental mistake. I discovered a supposedly great work of fiction which, according to some people I knew, would change my life. To their credit, they weren't wrong. However, the book I read Atlas Shrugged did not change my life for the better. Instead, it left me knowing what true evil felt like. The magnum opus of philosopher madwoman (and Superman arch nemesis)  Ayn Rand, it was written explicitly to solidify her economic, philosophical and political codes. Essentially, this is the Bible of the weird philosophy of Objectivism.

This strange little philosophy has had a disproportionate effect on world economics and thinking, especially in the United States of America. It has influenced politicians, philosophers, gurus, and most significantly, the head of the United States Federal Reserve who oversaw the disastrous policies leading to the 2008 Financial Crisis. Some would say that isn't a coincidence. Reading its long drawn out piece was misery personified.

Imagine then, to my chagrin, discovering way back in 2015, that after years of simmering in development hell some fanatic acolyte far sighted visionary John Aglialoro, had finally decided to bring Ayn Rand's creation to the screen. 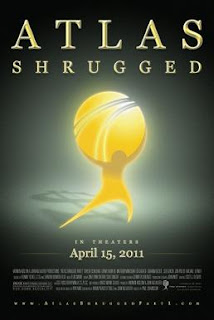 Now, for a quick cliff notes version of Objectivism. Essentially it is be selfish for selfishness sake. To use the fancier terms, pursue your own enlightened self interest (rational egoism) and that laissez-faire capitalism is the only system which can allow you to pursue this. There's more boring 'metaphysical' stuff about how true reality can be expressed through art or human will, but its dull as watching paint dry so Rand wrote a book. Atlas Shrugged is intended to showcase how this life is to be lived. For a normal, sane person, it's pretty awful stuff.

Unsurprisingly, it has largely been roundly rejected by the civilized world and people at large, but, also unsurprisingly, rich right leaning white people tend to love it overwhelmingly.

Discussion over a movie adaptation has been in the works for decades, near since Rand first wrote it. However, while she was alive Rand was uncompromising with her vision and always demanded strict control over any script, something no producer or Hollywood exec was going to give her. Even after she died Objectivists still hoarded the story lest its purity be 'spoiled' by Hollywood elites. Eventually Aglialoro bought the rights, but numerous conflicts with writers and executives stalled the film from going anywhere. In the 2000s, there was talk of a two part series directed by Vadim Perelman, with people like Angelina Jolie apparently being considered to star. Finally, with the rights running out, in 2011 Aglialoro basically poured 20 million into this new film trilogy so he wouldn't lose them.

So what is there to say about this film?