Well what a year it has been! A year a laughter, a year of tears, and many other things besides. I think, in the interest of keeping my creative juices flowing, I should write an eloquent goodbye to a year that will hardly be missed.

First off let me say that 2016 has been a rather mixed year on a personal level. Many happy events and many turbulent ones. So that has rather distracted me from things which were going on in the larger world for a while.

In no way is this meant to be a comprehensive look at the last year. So much has happened and so much would need to be stated that it would be impossible to cover in a single blog post. Instead I will simply highlight my feelings on the past year and what a good, or bad, year it has been.

Well being honest this is one for the history books. The election that would never end was all over the news and there was a hulking gorilla hogging the air waves and the internet. Also, a gorilla was killed in a zoo and the internet went nuts for some reason. More seriously, 2016 saw a historic election take place, and no matter who won it was destined to be one for the history books. But, now we have our second choice in the White House, and President Twitter is ringing in the new year for a very interesting four years come January.

ISIS has shaken up things in the Middle East and Europe, bringing terror to the capitals of the European nations. However, in the Middle East itself a scrappy coalition is forming to try and drive them from Iraq, Russia has been busy rolling them back in Syria, and we may in a few years see the organizations demise from the face of the earth.

It's been a sad year for celebrities though, and although President Twitter was Times man of the year, I can think of a sort of better one: 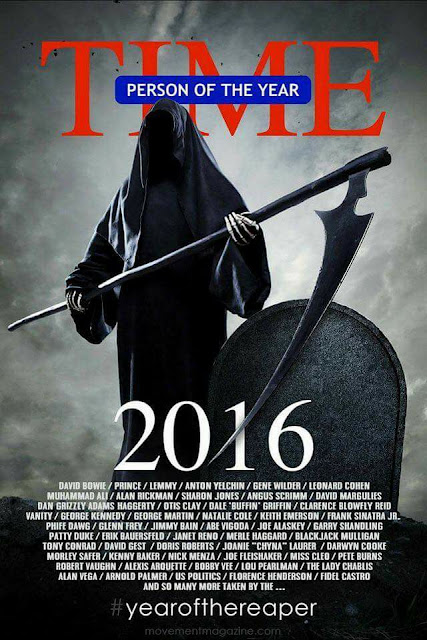 Though we got Rogue One, so there's that.

The Winds of Winter hasn't come out yet, and Season 6 of Game of Thrones was alright. But the next Brandon Sanderson book is confirmed! Also, Neil Patrick Harris is playing Count Olaf in a Netflix series. So there's some good pop culture news at least.

All in all 2016 is not a year I will look back fondly on. There were some good moments for sure, but all in all I'm glad to say sayanora.

Posted by Stienberg at 17:50 No comments: