This month has been a month of high fantasy for me. However, I have indulged myself by not just limiting myself to the regular fare of swords and sorcerer's, but have gone into the world of magic and flintlocks as well. However, recently I was able to read a book which has been catching my eye for some time now, and I took my first step into steampunk fantasy!

That book of course, was The Waking Fire, by Anthony Ryan. 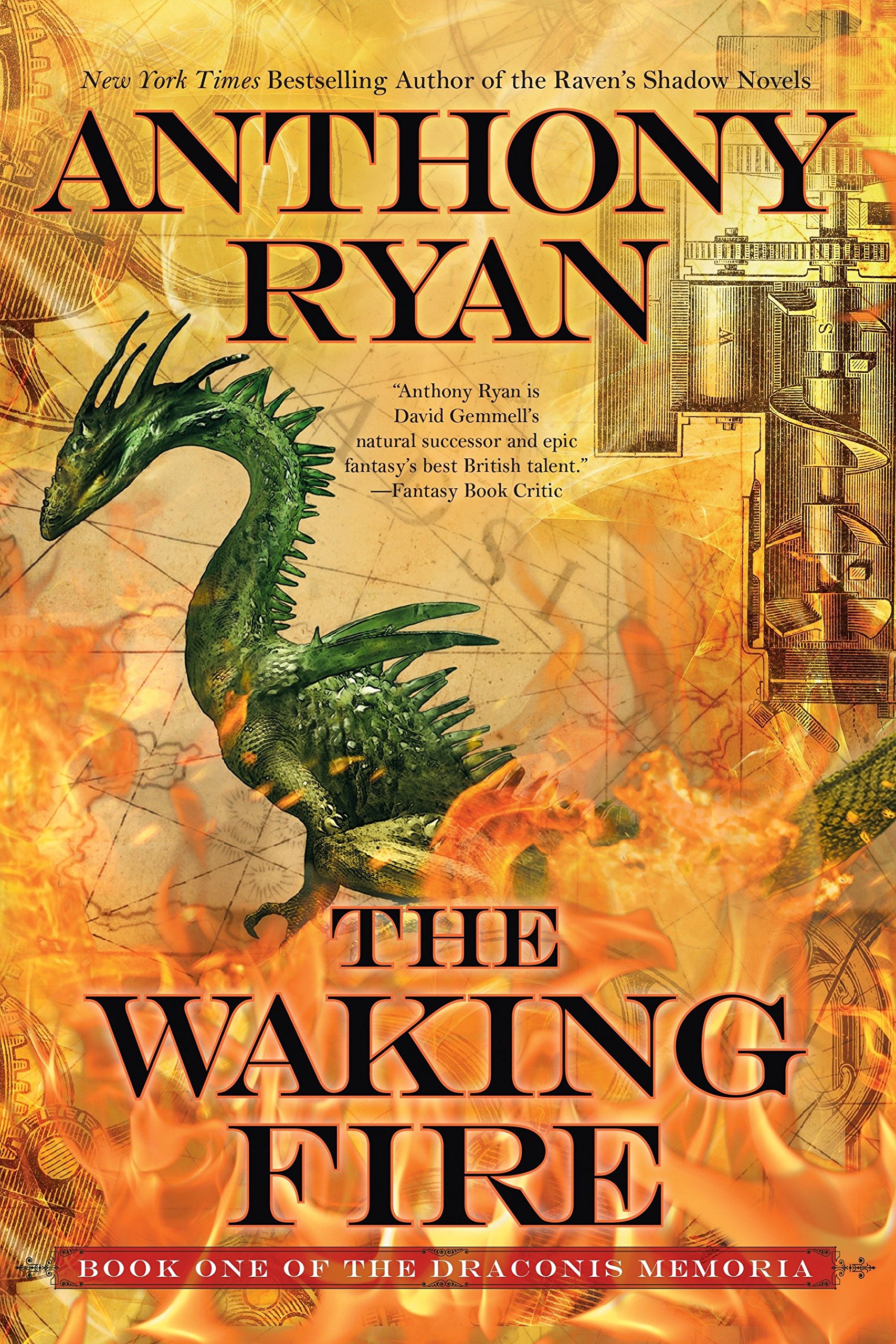 Welcome to a world of rifles, steam power, electricity, and dragons. The Ironship Trading Syndicate, the largest and most successful company of the Corporate world, runs on drake blood. Controlling the largest sphere of influence on the foreboding continent of Arradsia, they hunt and capture drakes to fuel their society. From ships to long range communications the blood of drakes is a necessity for keeping the world going.

It also gives the Corporate world an advantage over their one great rival, the powerful but fading Corvantine Empire, which seeks to control this precious resource for itself.

Enter Lizzane Lethridge, granddaughter and daughter of famous inventors, and an extremely effective spy and assassin. She is being sent to Arradsia by the Syndicate to take matters in hand as war looms between the Empire and her company. All in pursuit of a mysterious device which may turn the tide.

Then you have Claydon Torcreek, a petty thief who dreams of nothing more than getting out of the slums of the great colony city of Carvenport. He just wants to make enough money to flee his past and bring his friends to safety far away from the ferocious continent of drakes and the grim tribes of Spoiled who inhabit the Interior. Little does he know that destiny has greater plans for him.

Finally, we have Second Lieutenant Corrick Hilemore of the Ironship Protectorate Vessel Viable Opportunity which patrols the worlds oceans to make them safe for commerce. Sent to hunt down pirates, he finds himself caught up in a conspiracy well beyond his pay grade.

Honestly, this book was awesome. It mixes the best parts of Brandon Sanderson and the Mistborn series, with all the things David Weber does right in his many series, and notably Safehold. But, for those slim similarities, it holds its own with a unique style, magic system, and unquestionably epic action and adventure. From high seas hijinks, spy vs. spy action worthy of James Bond, to amazing adventures in the Interior worthy of Indiana Jones or Crocodile Dundee. Honestly, its a blend of never let up action which will keep you engaged and subject to a new series of awesome adventures in each chapter.

The world is, quite frankly, one of the most unique in terms of world building I have come across since Brandon Sanderson. Forget the true and rightful king, it's one nation under copyright. The world our main characters hail from is one which knows no democracy, little true political freedom, and is one where contracts are as binding as oaths. Corporations run and own everything, but the most powerful of course has the most say. Shareholder is a rank of privilege, and the managerial class are as close to nobility as you get. Everyone else is a worker whose trying to scrape their way up the corporate ladder.

Then of course you have the Empire. Backwards, corrupt and decadent, but for all that still the most powerful and potent force not in the Corporate sphere.

With this little cold war going on, the magic system plays a big role. Though yes the powers are color coded for your convenience, you find it nice and simple to keep track of. Each user is not limited to one color of drake blood, and may use all of them. However, many become adept at one or the other, few can master all of them easily. It causes some fascinating action scenes as blood users square off against one another.

Of course, the author doesn't skimp on guns and ships either. The knowledge of weapons and warships reads well, and you can really believe that the people know their stuff, with rifles and pistols being the order of the day, while on the cannons blaze away at armored ships which run off blood burning power, giving them incredible speed. These are all thought out logically and given true advantages and weaknesses, which keeps things constant and quite exciting as you try and figure out who can win in what situations.

In this world though, you do get an idea that things really are shrinking. Though the Interior is vast and dangerous, you get the sense you are seeing the end of an era. Drakes are becoming harder to find and harvest in numbers, and are virtually extinct near the coast. One is brought to mind of the death of the buffalo on the Great Plains as they were hunted to extinction.

For the plot, I really can't say much for risking spoilers. It honestly goes at such a break neck pace with revelation after revelation that you'll be on the edge of your seat as the story progresses. As it goes on you realize nothing is as it seems, and many of the things our characters discover are downright unsettling. Heck, many of the finds later on seem like something straight out of H.P. Lovecraft!

None of the characters gets a short shift in these stories. Each has a good arc which they run with. Lizzane with her secret mission infiltrating Corvantine territory and Clayton with his run into the desolate and dangerous Interior with a crew of Contractors out for the ultimate prize. Perhaps only Corrick doesn't get as fleshed out as he deserves to be, but that's what we have sequels for of course!

If I had to say anything bad, maybe some of the revelations lacked proper foreshadowing, and one or two events were unceremoniously dumped on us, but with nary a slow scene and constant action paving the way forward, how can I complain?

A solid start to what promises to be an overall solid series. It shouldn't be missed!
Posted by Stienberg at 22:22