Well readers one of my reading highlights of 2017 was finally re-reading the Mistborn trilogy, something I hadn't done in well over five years. I personally feel lucky because I got to purchase it in a boxed set and so didn't have to wait a few years between releases and wonder what was going on. This time around I was able to read it with a detailed set of annotations Brandon provides for the series giving you some insights into his writing process and some minor details on the world you don't see in the main novels.

Re-reading it I felt transported back into an original fantasy world and was able to remind myself that Brandon Sanderson is one of the greatest fantasy authors of the 21st Century.

Why you ask? Well that is because the Mistborn trilogy is (in my opinion readers) one of the greatest pieces of fantasy fiction ever written!

The series set in a world very much not our own, a world called Scadrial. Ash falls from the sky covering the land in a perpetual gray, the vegetation is brown, and life is hard. In it we are introduced to the Final Empire ruled over by the Lord Ruler who is the temporal and immortal god emperor of this realm that encompasses all humanity. The nobility rule over vast estates of slave skaa workers who are the property of the empire, and a fanatical Steel Ministry, with its fearsome Steel Inquisitors, enforces orthodoxy and compliance throughout the empire.

As a warning, there are spoilers below the cut, so continue at your own risk!! 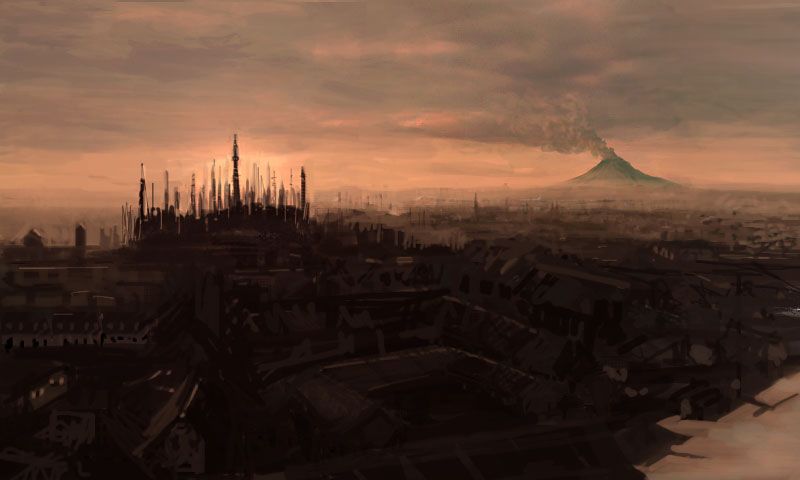 The setting itself is delightfully unique and as the author himself states in the annotations:


I intentionally hit the setting very hard in this chapter. People bring a lot of preconceived notions to fantasy, and sometimes it’s difficult to shake them free. With this book, I don’t want people to assume an immediate time period or culture for this world. In realty, I’ve stolen from all over the place. My hope is that I’ll be able to destroy people’s conceptions quickly, then instead build my own world in their mind.
So, here we have a land where the sun is red, ash falls from the sky, mists come upon the land at night, and plants are brown rather than green. In addition, we have a slave population who live like very rural peasants–but, at the same time, Lord Tresting checks his pocket watch in the first scene. Later on, you’ll see gothic cathedrals mixing with people in near-modern clothing. It’s all just part of the image I’m trying to create–a place that isn’t set in any particular time.

It really helps to suck you in, and evoke a world that isn't your own, making the prologue powerful in delivering that. With a unique sense of being out of time and out of our world as well. I have always been able to vividly remember this particular prologue.

It doesn't hurt that it introduces us to one of Sanderson's most interesting characters, Kelsier.

Setting and magic aside, the characters are the heart of any series, and Mistborn delivers on good characters in bulk.

The main characters are all part of the "the crew" in a very heist drama/Firefly sense. You have the crew leader, Kelsier, an enigmatic and fast talking wise cracker to who can kill you six ways to Sunday with a belt buckle. Sazed, a rebellious Terris steward who helps criminals and defies a living god. Then there is Dockson, the brains of the group who manages to keep Kelsier's insane and over the top schemes running even when they fly in the face of logic. Ham, a boistrous bruiser who is really a gentle giant that loves philosophy. Breeze, a snobby man who loves to manipulate peoples emotions. Finally, there is the grouchy gimp Clubs, who provides the safehouse and the protection the crew needs to operate!

Then we have Vin, our main protagonist. A gutter rat who one day discovers she is not only a user of the series magic, but the most powerful user of magic, a Mistborn, who has access to all the powers any of the other less powerful mistings could use. Overnight she goes from powerless street urchin, to potentially one of the most powerful women in the world. Of course, she has to first go through a tricky training tutorial by a man who many speculate might not be entirely sane.

New characters are introduced as the series goes on, new heroes (the great Elend Venture for example) and new villains. Each with interesting stories of their own and excellent roles to play in the series.

The series though, addresses some of the burning issues and questions that are at the heart of Brandon Sanderson's other writings. Religion, idealism, morality, philosophy, hope and despair, and numerous other issues. Sanderson is in his prime here having characters run through deep moral and philosophic conundrums that can't be solved with a wave of the hand. These play into very  real and present problems as the world seems to be literally ending around them!

Each book in the trilogy raises the stakes for our main characters in very immediate and believable ways. You go from plotting a rebellion against an evil empire, to asking the question of now that you have taken the reigns of government, well, now what? If all that wasn't bad enough an evil force seems to be threatening all of mankind!

The series goes out of its way to turn some fantasy tropes on their heads. Prophecies are inverted, the heroes struggle to establish a new society in the face of rampaging warlords, and even all their triumphs on the field of battle seem impotent in the face of a rampaging deity. With this comes great struggles.

Characters have to really question their most sincere beliefs as everything they once knew is turned upsidedown, whether it is killing their divine ruler, personal relationships that seem to be out of step with one another, or even their very faith in the existence of any deity or afterlife when faced with personal tragedy. These are all powerful questions which drive the plot and the characters, and each seems to be answered in a satisfying way by the end of the series.

As usual though, the world Sanderson creates is fantastic. Scadrial is alien and authentic, with its own bizarre creatures and inhabitants. The blob like monstrosities known as mistwraiths, to the barbaric monsters that the Lord Ruler unleashes upon his enemies called koloss. 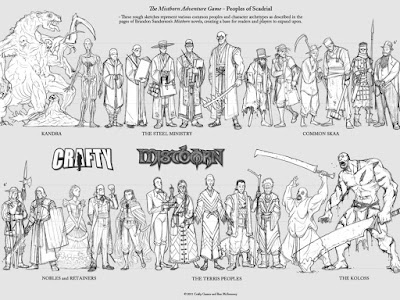 This all is powered by Allomancy. This magic system is probably one of the most unique ever devised by Sanderson, with the use of metals imbibed by the user to power great feats of strength, agility, and to manipulate emotions. Personally, I could think of a few cases where it would come in handy for me in real life. The series though, goes out of its way to point out the downsides as well as the upsides of this magic system. Impure metals used by an allomancer will make them sick, maybe even kill them. Constantly using your metals will cause you to mutate in odd ways as your powers literally overwhelm your bodily senses. Heck wooden weapons are a great weakness! Brandon as usual, makes this a very logical system with an equal and opposite reaction.

Now as I have said, I view this to be one of the greatest series in fantasy, and I also think that to date it is Brandon Sanderson's best work. The reasons behind this are legion in my opinion. Outside of his stand alone novels and short stories, this is the most tightly plotted and self contained of his works, with the heroes and villains all coming together in a satisfying climax after intensely raised stakes in each novel.

Overall the characters grow to your satisfaction in this series and they face challenges and triumphs that you can enjoy. The deep musings on faith, religion, trust, and even godhood have meaning as part of the greater context of the series which allows you really sink your teeth into the meta plot as these issues are both immediately important to the main characters and the overarching story as a whole. One of my favorite arcs is Vin's character growth from an untrusting street girl, to a confident, powerful, and independent woman in a healthy relationship with a man she regards as her equal. It makes for excellent story telling that you can enjoy.

Also, the action is just awesome. Allomancy was created to allow crazy Matrix style fights with duelists jumping and throwing things (and people) around like Jedi on steroids. Perhaps one of the most memorable scenes in the series is when Vin jumps into the sky, only to come crashing down with a sword as big as she is to bisect a man and the horse he rode in on!!!

If you can't appreciate that then readers, I don't think there is any action scene you would enjoy.

Personally, I will always love this series, and will always recommend it to others. If you enjoy good fantasy, strong characters, and great action, this is a series for you.
Posted by Stienberg at 09:00