Well for my latest review, I'm going to take you back to a simpler time when zombies were all the rage, and they weren't the stars of AMC's The Walking Dead and the White Walkers weren't threatening to cross the Wall. Instead they were simply coming to eat you from the safety of your own living room.

In that vein Day By Day Armageddon should be considered a classic of the zombie literary genre. 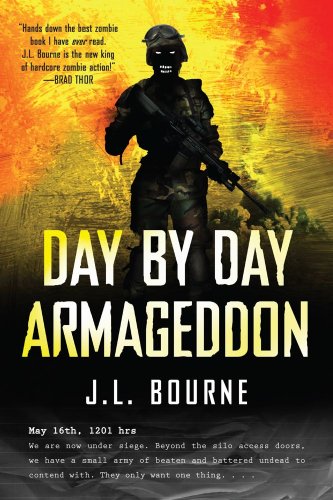 This story by J.L. Bourne is presented in diary format, much like Dracula, but with only one POV. Here we enter into the world of one Kil, a former US military aviator who decides to keep a comprehensive journal as a New Years resolution. This is fortunate because he's just in time to chronicle the end of the world.

Reports begin to emerge of a mysterious virus ravaging the population in China. Though the government tries to hush it up, it soon becomes clear that the virus is very contagious, and extremely deadly to all who catch it. The infected become violent and hostile, attacking the uninfected and... well you can see where this is going can't you?

Kil begins chronicling the outbreak from the comfort of his own home in San Antonio, where he does his best to hunker down and ride out the storm. Unfortunately, he begins to see that society at large is starting to fall apart and as the disease breaks containment, he must begin an epic saga of survival, chronicling it all in his journal. He does this so if he dies someone will know what happened, and so he can remain sane.

That's great for us since we wouldn't have a story otherwise!

The first person narrative gives us a great window inside Kil's head as he struggles to come to terms with a world gone literally to hell around him. He has difficulty adjusting to a world gone mad, and the fact that he has to deal with the dead trying to eat him on a daily basis. Seeking just a little bit of humanity he is lucky, encountering other survivors and working together with them in order to survive the total breakdown of the end of the world. From his enigmatic neighbor John, to other survivors and families he meets along the way, even a dog.

Unable to simply, stay put, he bugs out in order to try and get as far away from a high concentration of the undead as possible. This sets us on a journey across the apocalyptic wasteland which was once the United States, one now ravaged by the zombie apocalypse, and a desperate fight against the zombie hordes by surviving military forces trying to reclaim the American continent from the dead.

One thing I like about the story is that the first person narrative gives us an excellent look into the narrator's state of mind. You feel what he feels, and you see things from his, and only his, point of view throughout the story. The fear is real as he relates escapes from near death, and we feel for his companions as it becomes clear at any moment that they could be eaten. The creepy events he experiences stick with you, and it is chilling reading about his early encounters with the undead.

While it is a central conceit the author survive's if we're reading this journal...that's not a guarantee. Considering the number of other doomed survivors whose logs we come across, it's a scary possibility the story could just pick up from someone else's point of view as they come across his last will and testament. But thankfully the author doesn't shuffle off his mortal coil. In this book at least.

Bourne does a great job of showing the collapse of society. From falling satellites to failing power grids, we feel it as the world we know just falls apart. The internet fails, news broadcasts simply cease, and our ability to interact with our fellow man falls by the wayside as the dead isolate us more thoroughly than we can imagine. With little vignettes of the end of the world scattered throughout (encountering a zombified hiker walking the highway eternally in a thunderstorm, an undead infant in a car seat, a humorous message on a bloody apron, ect.) we get chilling insights into how the world has simply collapsed. Many of which, though we may have questions about them, we will never know the answer to what happened.

That paints a haunting picture of a world where mankind is no longer the dominate species. Eternally on the run from the new top predator and outnumbered millions to one.

Despite this, the story still gives us reason to hope. The protagonists stumble from one place of safety to the next, managing to find some measure of community and solace. They look out for one another and protect each other (none of the typical backstabbing and murder drama that punctuates the almost predictable Walking Dead series) and we even see that some semblance of the US government is around and trying to protect people.

Yeah the world is ending, but people can still be people. Good ones at that.

The zombie killing is fun, and to me killing zombies never gets old. Maybe not as creative with the wanton destructive as some stories, it still reads well and it is nice to see some more practical methods of dead dispatching versus over the top gore fests. We also get some fun revelations that the zombies are not quite just undead automatons, but the whole how and why of this armageddon is a treat the reader should enjoy for themselves.

Mr. Bourne also knows his stuff quite well. He presents Kil's story as one of a man who is used to prepping, and so that shines through. From lists of supplies and ammunition, to drawings and doodles that map out his current location. He also avoids the common trope in this type of fiction of waxing poetically about firearms and their different calibers and whatever, instead distilling things down to the practical level making it a quick and easy read.

Now I was lucky enough to buy this in a two book pack which contains both the first novel, and its sequel Beyond Exile which continues the story. There are two further installments after that, and I think all of them keep things going quite nicely.

Reading this book in October has become a sort of Halloween tradition for me, combining my love of the zombie genre with some fun spooks. I think that if you like a good novel, and even if you're tired of zombies, its worth picking up just to enjoy it!
Posted by Stienberg at 22:11