Not Your Average Alien Invasion: Out of the Deeps

We all know the classic tropes for alien invasions. The Martians (or whomever) come down to earth, they begin burning our cities, slaughtering our populations, and generally taking over our land masses. They start to terraform Earth more to their liking, and humans generally must scatter before their superior technology. This is a staple set all the way back in 1898 by H. G. Wells in 1898. So we all know what to expect. Or do we? 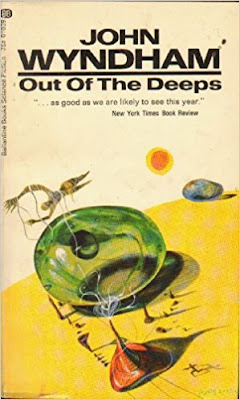 Out of the Deeps (or by its' English title, The Kraken Wakes) is a story that goes out of its way to reinvent the alien invasion narrative. It takes the alien invaders and makes them, well, very alien indeed.

The story is framed through the eyes by its narrator, Mike Watson, with the support of his wife Phyllis, and a major supporting role played by Professor Alastair Bocker. The husband and wife paring manage to play eye witness to many extraordinary events of the alien invasion, and as such provide us with as much "reliable" witness testimony as we can count on. Indeed in the very first paragraph the author goes out of his way to make a little jab at the "reliability" of eye witnesses, and so we only get one view of the unfolding invasion, which may or may not have all the facts. Though for the purposes of the story they get lots of good guesses.

The book is divided into three phases, each chronicling one phase of the alien invasion and its effects.

As a warning I will say that from here on out I will be discussing some spoilers, so moving on, you have been warned.

The first phase is of course, the aliens actually landing on Earth. Well it's amusing since they don't even touch dry land, in fact they all land around deep water, water usually up to three thousand fathoms in depth. The alien landing craft first simply appear as fireballs in the sky, in fact they are so little remarked upon that it takes years for the majority of the planet to realize that aliens are even invading at all!

Mankind of course, seeks to investigate these goings on in the depths of our seas, and so sends a bathyscope down to investigate. Now at this point we will get the clearest look we ever get at the aliens (shadowy, out of focus creatures, maddeningly undefined) and even then it is not 100% clear we are seeing the creatures themselves!

The loss of the bathyscope, and the two naval officers within, prompts the dropping of at atomic bomb on the aliens in the deeps.

This proves less than effective, and merely leads to retaliation on the aliens part.

One of the great things about this book is just how alien and mysterious these creatures are. They are apparently used to pressures well beyond that of mankind, and can only subsist at the extreme depths of our oceans. Their motivations are completely unknown, and we don't even know what the aliens themselves look like. Professor Bocker though, postulates that it might have been possible for the two species to have coexisted peacefully, as none would have noticed the other in the face of such extreme differences in environment. However, the misunderstandings early on lead inevitably to conflict.

Even the aliens methods of carrying out the war seem puzzling. At first they simply sink any ships which cross their deep territory, they then move on to a much more elaborate tactic. All across the world coastal villages simply seem vanish in the night, with strange slime being found at the scene. Its only when our protagonists manage to catch the aliens in the act of kidnapping humans with "sea tanks" which carry on to the land and ensnare people to roll them into the deeps for purposes unknown that we put two and two together. Though what is the purpose of kidnapping humans like this? Are they being eaten, or are they being studied? No one knows.

This proves to be a misstep for the aliens as mankind, in the wake of two world wars, and the ongoing Cold War, proves far more adept at knocking out the clumsy "sea tanks" and the aliens incur considerable losses (though it seems no aliens themselves are killed since no bodies we might recognize are ever discovered). Though mankind trumpets the eventual withdrawal of the sea tanks as a victory, Bocker again points out that this may be short lived.

Indeed it proves to be; as the aliens' counter stroke plays on fears which are all to familiar to those of us in the age of Climate Change awareness as sea levels begin to rise...

In any event the war is hard to understand for most people, and humanity struggles to fight back against these creatures from the Deeps. The human race, being much more land bound, proves unable to come to grips directly with their underwater nemesis. Our weapons prove at best only partially effective in discomforting the aliens, and that is only at a guess. The protagonists are left wondering if they will ever be able to devise a weapon which will be able to properly harass the aliens before the end of the novel.

Humanity's response, is also far from united. With the Cold War raging in 1953 when this book was published, it is understandable the author expounds upon the mistrust which would exist between the West, and the Soviet Bloc then in existence. The two sides at first suspect the other of being behind the alien attacks, and its only after great loss that they even remotely begin working together, and that founders in time due to mistrust.

Bocker himself faces scathing criticism from a press unwilling to listen to his ideas. He even calls himself a Cassandra at one point in frustration. He has a point as papers and news broadcasts take sides in the debates, either discrediting him or saying more needs to be done. The government in response, dithers until it is compelled to do something by the voting public.

Indeed government ineptitude and dalliance in order to "save costs" and "win votes" is on display. The might of the British Empire is not marshaled until it is almost too late to stand up to the alien attacks. And it's not just Britain which gets a scathing treatment for humanities' disunity.

Though the book has a more "meta" feel than some readers might like and its characters are more passive witnesses, the sense of a global drama of alien invasion is real. Out of the Deeps manages to convey a real sense of change as the alien effort takes its toll on mankind. And as far as alien invasions go it is quite unique in its establishment of interstellar invaders.

Quite honestly, if people were looking for a good alien invasion story and swift read I would heartily recommend this book. The action is gripping, and the invaders are truly alien compared to human life. This makes Out of the Deeps, truly out of this world.
Posted by Stienberg at 12:04