Trump has been in office for over a month now. A month dogged by scandals, outrageous allegations, and general inefficiency. Trump, in his one month in office, has been immensely insecure, whether it was about the size of his electoral victory, the size of his inauguration crowd, the stability of his own staff, scandal with Russia, and his great plans for the country. In less than a month continuing scandal surrounding Russia has emerged, his National Security Advisor Micheal Flynn was forced to resign, and nearly all of Trump's campaign staff are revealed to have had some form of contact with Russia, and his Attorney General Jeff Sessions had to recuse himself from handling any of those investigations as he "forgot" to mention meetings with the Russian Ambassador during the campaign. Now Sessions may be excused if he met with the Ambassador as part of his duties in the Senate, but the allegations cropping up around Micheal Flynn and other campaign and staff members, are inexcusable. 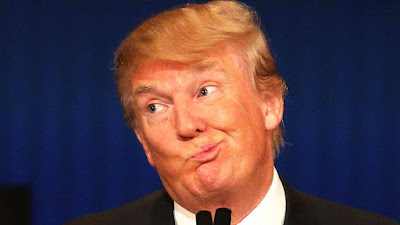 However, the unfolding damage against Trump regarding Russia is nowhere near as alarming as his continued attempts to obscure the problem behind a wall of paranoid conspiracy theories.
Trump has, in the last month, made a variety of outlandish claims. Whether it has been exaggerating the size of his electoral win, or that of his inaugural crowd, any time there is a suggestion to the contrary of his own bizarre reality, he lashes out against perceived enemies.

Most recently his healthcare plan has gone over a rocky road. When the media reported that there was resistance to it, Trump of course tweeted otherwise. Already he has declared the media the "enemy of the people" which is more than a little extreme. But this is in an already ever present claim less than two months in as Trump preaches "alternative facts" and leads people on a merry chase around the internet with unsubstantiated claims. His comments to the contrary do nothing to hide the opposition in his party to their proposed health care plan, nor does it hide the evident ire of the voters who oppose it.

The most sinister thing about Trump's denial of reality, is his tendency to blame his failings on shadowy conspiracies. This is an alarming trend reminiscent of the most paranoid delusions of tin pot tyrants. Though some examples might illustrate why Trump's seem borne less from his own mind, but the minds of crackpots he just happens to listen to.

Trump has previously blamed leaks from the White House on some apparent conspiracy by the Obama administration, organized by "his people", which is a term vague enough to avoid needing an immediate answer. Thus far he has neglected to provide evidence. Instead he has then claimed that "those people" are responsible for the town hall protests many republicans faced when unveiling the replacement for the Affordable Care Act. Conveniently they can also be blamed for all those protests back in February against Trump's policies.

However, his most recent claim that Obama tapped his phones, is more worrying. Making repeated tweets on the issue, he pushed the claim despite offering no evidence for it. Now his staffers must offer the half assed claim that Trump didn't literally mean Obama came and tapped his phones. Or even worse, that he didn't mean wiretapping in the sense of wiretapping. Each excuse is remarkably pitiful, not only because of Trump's numerous tweets on the issue, but also because no one is asking if Obama actually went to Trump Tower and did the job himself. Of course, already these claims are being rejected.

What is most disturbing about this whole case is that, like we have seen before, Trump is clearly getting this information from elsewhere, not his own head. We know he gets a disturbing amount of information from watching things like Fox and Friends and other less than reputable sources. He is essentially following a form of confirmation bias, where he only listens to information which supports his own view of reality. That makes it all the more interesting as he attempts to pass off his recent allegations about wiretapping on the New York Times.

So of course, once again this is all the work of Trump's enemies. Emmanuel Goldstein lurks in the wings it seems.

These claims, amongst others, are Trump's way of distracting from the very real problems in his administration. The ongoing scandal with Russia he seems unable to shake, his continued controversial attempt at barring immigrants from Muslim nations, and most recently his rocky start on his healthcare proposal. Unfortunately, these all eat up media time and prevent the discussion of other issues like the defeat at Standing Rock.

What they all denote though, is someone deeply uncomfortable with the truth. Trump it seems cannot grasp why his edicts aren't being followed, why he faces such an uphill battle on some issues, or why he gets such a bad rap in the media. But, as many others have pointed out, Trump is also a consummate liar. He twists facts like silly putty and slithers like an eel through hard questions, or ignores them all together in favor of soft questions. That he has people like Kellyanne Conway or Sean Spicer to cover for him and keep his own world view unhindered by any inconvenient truths, is icing on the cake.

As Seth Meyers asked recently: Can we believe anything Trump says?

On a more serious note, as I have said before, Trump is unsuited for this office. He is a man whose relationship with the truth is so casual they he's got a dozen different "truths" on the side. Being completely honest with you readers, when I went to write this article I had originally intended to try and chronicle all the pitfalls the Trump administration had faced, but President Twitter is so loose with facts and his own goals that trying to chronicle the whole ordeal of the weeks has been difficult, if not overwhelming. Too much for one blog post.

Right now only three things are certain; death, taxes, and a dishonest President.
Posted by Stienberg at 12:00