Throne of the Crescent Moon

Hello readers, I come back to you now with another review. This time I send us off to exotic lands of deserts and djinn, ghuls and dervishes. This week I bring you a review of Saladin Ahmed's, Throne of the Crescent Moon! 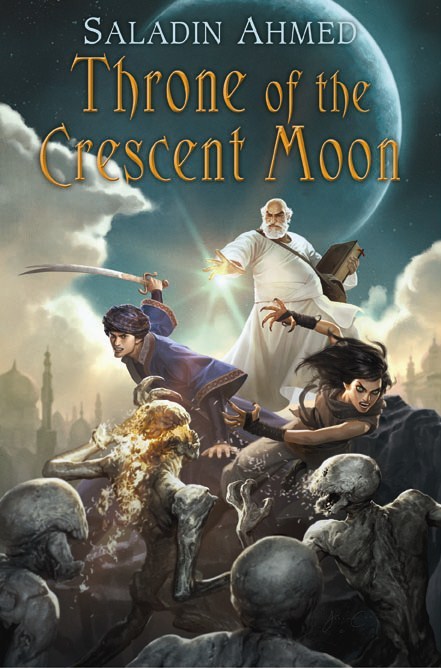 This is a refreshing and interesting fantasy book since it departs from what we would view as traditional fantasy in a number of what I consider to be very unique circumstances. The first is that rather being set in anything even resembling a facsimile of Medieval Europe, we instead get something that is much more like a fantasy Asia all mixed into one! We have a Khalif who sits on the Crescent Moon Throne of the great city of Dhamsawaat, an ancient society which is a sort of Ancient Egypt, and the surrounding societies all seem to resemble things like the Muslim Kingdoms of India or the Pacific. It's a fresh and as far as I'm aware, virtually unique look at a sort of pseudo-Islamic world in fantasy.

The book itself is written by a man named Saladin Ahmed, a man who is both a poet and a writer who has an extensive background in Islamic history and culture. This offers something very new to fantasy, and as far as I'm aware, something that hasn't been explored in depth. The novel has a very 'Thousand and One Nights' feel to it, and is really quite interesting in that sense. It gives you a look into a society that would be familiar to some, yet totally alien to others. It's actually quite like how I would imagine a foreigner reading our High Fantasy really.

It also offers up some rather unusual characters. For one thing the main character is a fat elderly gentleman in his late forties who is somewhat impious and becoming the last of a dwindling order of ghul hunters. His assistant is a pious dervish wielding a double bladed sword to cleave right from wrong and they eventually ally themselves with a tribeswoman with the ability to morph herself into a holy lion that can crush the forces of evil with her angel granted powers.

Not exactly your traditional fantasy  characters.

Their enemies too are a manjackal and a sorcerer who summons ghuls (or ghouls to those of you familiar with my Undead Menace article) to do his bidding.

Still some recognizable fantasy elements all skillfully blended together with new cultural ideas and locales. There's even a political subplot dealing with potential revolutionaries fighting against what they see as the despotic rule of the current Khalif, all for a juicy flavor of political intrigue and high fantasy action.

The characters themselves, Doctor Adoulla Mahkslood, Raseed ben Raseed, and Zamia are all fairly interesting characters. They each have some fairly good character building moments, periods of internal conflict, and issues with one another that serve to make them real and three dimensional rather than your standard do no wrong good guys, hell many of them even exhibit some good old fashion prejudice to those who aren't like them! For instance we have Adoulla and Raseed, two evil fighting partners with completely different views of the world, you have the old veteran Adoulla who has spent his entire life fighting and hunting monsters and is beginning to tire of it all, despite the fact that if he dies there is likely no one else who can carry on his orders knowledge and fight. He is also morally gray and fairly impious, and this clashes well with his young and eager protege who is from a religious order which dedicates itself to a lifelong struggle of virtuous justice. Raseed is very black and white in his worldview which tempers his reactions to any situation in an almost predictable way, but it also gets him into trouble as the story progresses.

Story wise the plot flows seamlessly from one scene to the next with very little pause in the running action and dialogue. You are driven from the beginning of the Doctor's quest, on a seemingly unrelated matter, into events that shake the very foundation of the city of Dhamsawaat itself! The story is wonderful and relentless in its telling and you really get a feel for each of the individual characters.

We also are treated to some wonderfully exotic action scenes featuring magic, sword fighting, and not a little bit of desperate cleverness on the part of the heroes. It also does a wonderful job of portraying magic that comes with a cost, whether in a persons personality, soul or body. Every spell cast has an immediate physical reaction both against those whom it is cast against, and those who cast it, making the act of calling upon magical forces seem very real and very challenging.

The setting itself  is also exotic and described in some detail giving it a very neat flavor. However, it isn't described as well as one might like. While I got a decent feel for how the city of Dhamsawaat was laid out, I couldn't be sure of everything that was in it and some details of the surrounding area and peoples seemed mildly to vague for how involved they were in the story. Some key locations could also have used a bit more description or even mention early on. For instance, the Khalif's palace is supposed to be the largest structure in all Dhamsawaat but it gets very little mention until directly near the end of the novel. Then one place called Angel's Square gets only cursory description despite being called breath taking and awe inspiring to those who enter it, I really don't have any mental picture of how it's laid out or what it would look like. Similarily Adoulla's house is something which seemed to be introduced a little too late with little preamble for all the meaning it had to Adoulla, something which I think could have been rectified by having Adoulla thinking wistfully about his house and commenting on its value to him earlier in the story.

The pacing of the novel is also quite fast with no real breaks being taken from character to character and all the action seeming to come at once with little suspense in between. We get some periods of calm, but they always feel like we're being whisked away with each character before we can catch our breaths.

That's not a net negative in itself but merely a matter of pacing which I think ought to be addressed in the sequel.

All in all the novel is a good read and is a fascinating insight into a world which is different from ours and the exciting conclusion left us with a load of problems for the heroes to face in the coming future. I felt excited to learn what challenges might crop up in the future and just what new crisis could emerge on the horizon for our heroes.

I've deliberately left the novels plot unspoiled as I think people really ought to read it for themselves so they can get a feel for the world and how it meshes itself out. The novel may feel a bit unpolished and perhaps a bit unrefined but it is well worth the read as Ahmed is really a writer to watch out for in the future!

Until next time readers!
Posted by Stienberg at 14:10