The Last Pilgrims: By Micheal Bunker, A Review 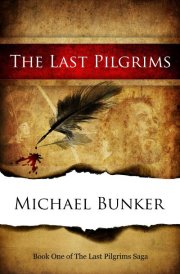 This book I picked up after seeing it advertised on other sites and having visited the book's website and the author's blog. The book and author presents a unique view point on life and a post-apocalyptic scenario in general. It could count among science-fiction, but the only real science fiction element I would say it has is the quickness of the collapse in the beggining (two-weeks or so) which firmly sets it out of that genre and into the regular post-apocalyptic camp.

I've heard many comparisons of thie book to the Hunger Games, or the new TV show Revolution. To which I say, well there are a few comparisons to be made yes. One of the main characters (Ruth) does use and bow like Katniss, and yes like Revolution it is a world where there really is no modern technology and most people don't use electricity as it is unavailable. Otherwise this book stands out as something completely different in its own right, in a good way!

The story itself centers around an area in West Texas and the community of the Vallenses, an Amish-like plain people who are a thriving religious community in a fallen world. Their model of prosperity however sincerely irritates their large and powerful neighbour, the King of Aztlan, who wants this land for himself. A free independant people of course cannot be tolerated.

The story is really a retelling of the struggles of the ancient Waldensians a group of Evangelical Christians who defied the might of the Catholic Church and suffered horrendous persecution at the hands of its agents before the survivors fled to the New World.

Micheal Bunker establishes right off the bat the kind of world we are seeing. His prlogue gives us an excellent synopsis (if not the outright cause) of the collapse and its extremely quick escalation from mere economic downturn, to minor nuclear war. Thus American (nay world) society as we know it is thrust five hundred years into the past with petty kings and lords taking up claims and projecting their power through armies of thugs. This would go ill for the pacifist Vallensian people were it not for the emergence of the Ghost Militia who are dedicated to fighting Aztlan and by extention protecting the Vallenses.

We get a clear look at the local political situation (the world one being understandably sketchy) and see just why the Vallenses are so persecuted. The king of Aztlan hates them as they are a large successful nation who are a) opposed to his rule b) setting a successful example for rebels from his own lands to follow and c) follow a faith that diverges markedly from the corrupt political Church in New Rome. Indeed he rightly fears his people taking this example and rebelling against him. The only reason he has avoided outright war thus far is internal problems, and the dogged persistance of the Ghost Militia killing his raiding parties.

Now though twenty years after the collapse, he is turning his attention to stamping them out completely. Thus our story opens with Jonathan Wall, respected leader of the Vallenses, sending a plea for help to the King of the South States. Unfortunately this is interrupted when a would be assassin just misses his target. Here we greet Phillip, the leader of the Ghost Militia as he saves Wall and brings in the assassin, Gareth, who has a ulterior motive of his own...

Then on we follow a colorful cast of characters, Jonathan's daughter Ruth, a militia rider named Timothy, a Aztlani knight named English, and Jonathan's son David.

Each character brings something unique of their own to the story, Ruth in her growing up experience, and David's internal conflict between his faith's pacifistic nature, and the brutal reality of the war creeping down upon them.

The dialogue is good, well written, but often slightly to mild mannered for my taste. Though it does serve to show how society has fallen down with the disapearence of so much of the modern slang that we know, verses a more eloquent and Biblically reflective speech that would come from a deeply religious society. This is though contrasted with the speech of those from Aztlan and beyond.

The war itself is put in very brutal terms, with heartwrenching atrocities and brutal battles. Though we clearly see that Aztlan is the evil agressor and the Vallensians a normal people caught in the middle of a territorial and religious conflict. The battle scenes though, are spectacular. You feel as though you are right in the middle and Bunker's keen eye for these details gives you an impressive mind's eye view of every fight and each tactic undertaken by the combatants.

The moral, and philisophical issues brought up by the many characters will leave you asking deep questions yourself about how prepared you are in your own life, and of course in your spiritual life.

Micheal Bunker is also something of a philosopher, practioner and writer in the world of prepardness (and if you visit his blog you will see he has a refreshing habit of practicing what he preaches) thus there is a great element of prepardness and self-sufficiency in the novel with some unique and interesting ideas that readers interested in such things may find interesting. There are also a number of health facts and tips that are pleasantly surprising (organic beer anyone?).

We also get lovingly beautiful descriptions of Texas and the landscape. The blue skies, the wonderful countryside, the deadly desert, and of course the Wall ranch which is given loving detail and sounds like a truly wonderful place to live. In fact the author has made me sincerely want to go visit this beautiful area sometime in the future.

The author has an expert way of reeling you into the story and making you care about the troubles of the Vallenses and the epilogue left me feeling both heartbroken, hopeful, and intrigued.

Unfortunately like all novels I read it does not get a complete pass.

Most of my issues with the book were minor, a lack of comprehensive detail and timing is one. The lack of comprehensive detail left me fuzzy on certain aspects of what was going on or how certain characters looked, I was extremely confused as to David's appearance for some time actually, and I found The Mountain was given a mean lack of characterization early on in the novel, which would have saved considerable trouble later on. The major characters, such as John, Phillip, Ruth, Gareth, and Timothy, all recieved adequate page-time for me to epmhasize with them and get an understanding for their motivations and troubles. Characters like The Mountain, and Piggy needed better characterization earlier on so we could get a better view for what they did later in the novel. That and I didn't find a good timeline of when these events started, and when they finally ended.

Also the Duke of El Paso. This is merely a personal pet peeve of mine but he did not make a good villain. Described a short, wearing boots that make him look taller, child like in appearence with a high picthed voice and ridiculous accent, he was a caricature. Thus he made for an extremely irritating character whose redeeming feature was we did not have to see him much. He exuded no sense of menace or threat which made me heave a heavy sigh and wonder what the King of Aztlan, who sounded much more sinister, was up to. It wasn't until we met Sir Jarius Whiteside, Chancellor of Aztlan, that I felt much real respect for the villains themselves. Sure they had clever plots but the offscreen nature of them left me feeling a little underwhelmed by their impact initially until we got about half way through the book.

Then of course there was a minor bit of consistency between the beggining and end of the novel. I found the low tech, and scavenger society of this world fascinating. But earlier on we are told that guns are heavy, difficult to use, and ammo is hard to come by. Then near  the end we have gun battles taking place on the large scale! It was something of a continuity error that left me scratching my head after but if one can put it aside it doesn't harm the book at all.

My one final nit-pick is that I found it to short! Not a criticism per-say but I am hoping for more by Mr. Bunker and hope that as he gets his writing legs under him he will begin writing longer works so I can keep reading longer!

Overall this book is a wonderful read full of rich characters, an exciting world, excellent survival tips, and a sense of the holy and pure as well, which is immesely refreshing.

I have been impressed by Mr. Bunker's writing thus far and I eagerly await the upcoming sequel Cold Harbor and its continuation of the tale of the Vallenses.

The Last Pilgrims has been an enjoying read which kept me guessing for most of the novel. It was also a very happily unique post-apocalyptic fiction with some (thanfully) tasteful morals and a good message throughout. I would be happy to read it again and certainly will. I encourage readers who are interested in post-apocalyptic fiction to pick it up and read it, you will not be disappointed. I am glad to advertise for Mr. Bunker and let people know about his wonderful and original work.

4 out of 5 stars for this piece of wonderful literature.