A Sad Day with a Historic Passing

Today readers I was saddened to hear that the first man on the moon had passed away. That's right ladies and gentlemen the man who said 'The Eagle has landed' and made that historic walk has passed today leaving us with a great legacy to be fulfilled. He was the first to leave his prints on the lunar soil, and they shall remain there as a legacy to him for millenia to come. Yes Neil Armstrong has passed away today.

Though he was not the last man in the moon we have much to do to live up to this brave pioneer's legacy. Though we have not set foot on the moon in over four decades we can only hope we will do so again in the future so the bravery, sacrfice and courage of these early space exlporers can live on and give us a shining hope in the 21st century.

Let us remember the many historic moment when he said 'That's one small step for man, and one giant leap for mankind.' I salute you Neil Armstrong and may your memory spur us all on to greater deeds as we gaze starward and begin to explore that final frontier. 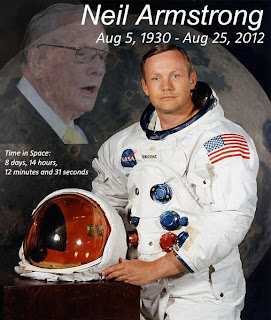