Brought to you by Satan

Now before I post this article I suppose I should clear this up that I personally am a Christian who believes in the Lord Jesus Christ and that he died for my sins and along with the Father, Son, and Holy Ghost will lead me to eternal salvation.

In light of my beliefs I am usually surprised by both the virtrol and the stupidity of people when it comes to understanding my faith (or any other peoples belief for that matter) in regards to both theology, practices, and what constitutes the sacred. In my time I've dealt with those who are of  the militant atheist stripe in both real life and on the internet (I'm thankful to say that I remain friends with the atheists in my life despite some lively debates on the subject). I usually come across the regular anti-religious pomp and bigotry on the internet and I'm never really surprised by it. The ignorant who like to flout their 'knowledge' of the subject of Christianity really astound me, especially those who claim to have been Christians before turning to atheism. In my many conversations with them I rarely found them to have an even basic grasp of the Gospel or even the words of Jesus Himself! So I always have to question their so called 'knowledge'.

But recently on Facebook I found this little goody that made me laugh. 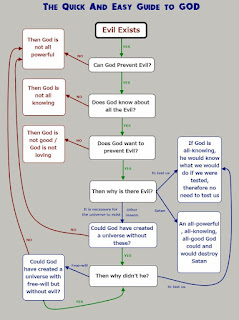 The flowchart (posted by a user with the name satan, hence our title) proclaims itself 'the quick and easy guide to God' and is anything but! Instead it asks some relatively simple questions after the statement of fact evil exists. I'll say to readers right now, yes evil does exist. Whether the corrupt politician lining his pockets with ill begotten money, the pimp abusing women as sex slaves, or the terrorist preparing to detonate himself to blow up a bus full of school children evil in the human heart surrounds us as a part of the human condition.

The chart then proceeds with a number of questions such as 'Can God prevent evil?" or 'Does God know about all the evil?" and with each 'no' answer one is directed to the conclusion that God is either not all powerful, knowing, or loving. Mind you of course that each time no is answered that is in direct contradiction to the Scripture, and since one must use the Scripture to get to know God and His divine nature it is fairly obvious that the no answers are really baits early on until we get to the final assertion 'Could God have created the universe without these?' in which case the logic goes that if he could we have two answers as to why He didn't create the universe without evil because a) free will or b) He wished to test us.

Now the chart responds that if a) Could God have created the universe with free will but without evil? Now here I have to step in because when we go from here the reasoning gets rather cloudy. Let me ask this, if all that is good and just stems from the Lord and he gave us the free will to chose otherwise what is logically all that is the opposite of what He loves? That would be what you call evil correct? Of course it would for "Every good and perfect gift is from above, coming down from the Father of the heavenly lights, who does not change like shifting shadows." (James 1:17). That which is just is pleasing to the Lord. Everything else such as perversion, theft, and debauchery is a sin. So if God created the universe without evil then he would created it full of everything pure and holy and mankind would either not be in it, or unthinking robots who had no choice but to praise God and would rob Him of the very beings He created to inhabit his Garden. Now is seems even the chart recognizes this problem so it comes at us with choice b for what I suppose the creator figures is his coup-de-grace.

Choice b) is that God wished to test us and have faith in times of need to see who is worthy of salvation. Now the answer always to the idea of being tested is 'if God is all knowing He would know what we would do if we were tested and therefore would have no need to test us' this has two problems. One it commits the infinitely hilarious fallacy of saying that 'God must' or 'God would' as though the writing of the author and his opinions have any real reflection on how the creator of the universe is going to behave. The second problem is that it tries to undermine that God is all knowing by saying He would know how we would react when we are tested and therefore have no need to test us. Now those of you who understand why we have faith in Christianity should already be shaking your heads and saying how foolish this is, those who are scratching their heads and saying 'this makes perfect sense' allow me to disabuse you of that notion.

God is all knowing and 'the very hairs on your head are numbered'  as God knows all about all of us and all about each of our actions. When we sin it is plain to God what we have done, yet he forgives us in his infinite glory and wisdom. However, despite the fact that God is all knowing and all powerful He gives us the choice in how we are to react before Him or accept his forgiveness and He knows what to send against us and whether we can muster to the challenge or not. This we must do on faith. Take for example Job, whom God allowed to be tested beyond the reasonable limits of any man in order to prove that he was a good and faithful man. Satan took away his sons and daughters, his lands, his health and his dignity, but Job stood by his God knowing that even though he would suffer he would be rewarded in the next life. Again the choice lies in human hands as to whether they will accept His forgiveness just as the choice as to whether we would sin in the beggining lay in Adam and Eve's hands, despite knowing we had the option of choosing evil God allowed us to go ahead and do as we willed. Like Job he tests us to show us that no matter what is sent against us He will be there in the end and that we should accept Him regardless of what comes. As to knowing how we would react, this assigns a sort of human logic to God that by knowing the outcome he wouldn't do it again putting this silly notion that God must function according to the authors will rather than His own mysterious ways.

Now as a note in regard to the great tempter himself we have Satan whome all evil and rebellion stems from. Satan is a fallen angel who was regarded high in God's court and deciding that he was the most beautiful and powerful that he deserved to be God's equal. He was cast out with all his followers. Now he goes around tempting people and attempting to turn them away from God in an act of petty spite, while he knows his days are numbered and that in the end he will lose to the Most High. The chart says that 'An all-powerful, all-knowing, all-good, God could and would destroy Satan, sigh, that silly notion again. As the Bible says, Satan will be destroyed and sent forth into the lake of eternal fire. There is simply a time for that and it is coming. In the meantime Satan will continue a campaign of petty spite to try and overthrow God by destroying we who are precious to Him. In the end Satan will fall and the world will be saved.

Now I know full well that those of you who do not wish to believe will certainly not after I have trashed this sore chart and its assumptions. Then again those who do believe will be reafirmed in your faith and sing his praises with me. Then of course there are those of you who have had a seed planted in you and are on the road to accepting Him. Maybe I have put you one step closer to having faith in Him, perhaps I haven't. He alone knows these things. We on the other hand must have faith in Him, as after all if these things were certain and we knew the infinite nature of God what we do would not be called faith now would it?
Posted by Stienberg at 09:56