The Moon is a Harsh Mistress

Another one for the Great 2020 reread!

I originally read this sci-fi classic way back in high school, I loved it then and I certainly love it now! It is a classic story of science fiction, one of Robert Heinlein's best works IMO. A story of politics, life on the moon and the desire of the Loonies, as they affectionately call themselves, for liberation from the Earth based Lunar Authority. By any stretch of the imagination, The Moon is a Harsh Mistress! 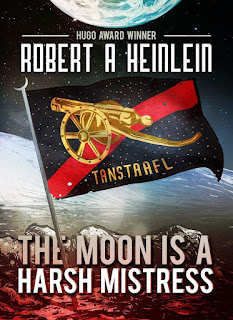 The story is told through the eyes of Manuel "Mannie" Garcia O'Kelly-Davis, a freeborn son of Lunar 'settlers' who comes to interact with a suddenly sentient computer Mycroft, or Mike as he likes to be called. He's the head honcho computer who controls the majority of the Lunar complexes and their functions. His sudden self-awareness is unprecedented and only Mannie talks to him, becoming one of his oldest friends.

However, Mannie is unsuspectingly drawn into a larger conspiracy when he attends a political rally which gets raided by the troops of the Lunar Authority. Suddenly caught up in a manhunt, he has no choice but to go into hiding alongside his new revolutionary comrades Wyoming "Wyoh" Knott, and Professor Berdardo de la Paz. When informed by Mike that the moon, which exports hydroponic wheat to Earth - in seven short years famine will be stalked by famine in a resource collapse, they decide that they must free Luna from Earth based tyranny. The revolution has begun!

A revolution framed through the eyes of someone who is not a revolutionary is a clever trick, as he serves as a conduit for the audience to be shown the methods of revolt which will bring Luna freedom. We have an in depth look at how the revolution is planned, and then helmed around the person of "Adam Selene" who is Mike simply manipulating his abilities as the great computer to make himself look like someone else and the ostensible leader of the whole revolt. From organizing cells of dissidents to creating false broadcasts for Earth consumption it is a meticulously well planned operation, with Mike planning things down to the decimal points!

For a brief aside, Mike as a computer and character works so well. As I noted elsewhere, the idea of him simply being plugged in and becoming sentient is a pretty common theme in modern AI thinking, but his inability to completely understand humor or many other human nuances is a pretty good look at how alien and unlike us any actual machine intelligence would probably end up being. As a character it also makes him both relatable and just on the line for being alien. What is even better though is that say unlike Rudi from the Emberverse and Merlin from Safehold, he is not infallible. While he is an immense help to the revolution on Luna and in accomplishing other goals, he has a set of limitations which actually build tension rather than deflate it. It's wonderfully well done and very refreshing compared to many modern takes on the same idea.

Of course, we also get a chance to look at Heinlein's concepts for Lunar society. It is one descended from prisoners imported very much against their will to work the Lunar surface and it was overwhelmingly male. It has led to one where people are unflinchingly polite as crossing a line could easily get you 'eliminated' by your fellows. And you better not think of touching a woman! The men outnumber women still three to one (better than the old days!!) and so anyone who so much as touches a woman against her consent will be mobbed and murdered before he can so much as twitch. It creates a society which depends on group marriages and line marriages to survive. Polyamory is a way of life by necessity. Very true to much of Heinlein's free love ideals. It's a unique frontier society, one that makes an interesting case for itself.

Reputation is important, and men live and die by their reputations. Indeed, holding ones family up is quite important. In economic terms, barter is, outside deals with the Authority, the order of the day. It's basically an unregulated free economy. It is also a remarkably tolerant and integrated one. Mannie is mixed race, and in a later event when he goes to Earth this is contrasted with the more intolerant culture of the North American Directorate, especially in Kentucky. It's a chance for commentary on events of the time, and shows itself off as pretty progressive.

The dialect of the Loonies is also delightful to read. They have numerous loan words from Russian and Chinese, and these are liberally sprinkled in adding a great flavor to the people. It takes some eking out, but once you catch on it is amazing to read!

But of course this being a novel of revolution, so politics is pretty front and center. Compared to a more preachy novel like Starship Troopers, this one is fairly tame in expanding on Heinlein's political thought. Here we have an attempt at building an new, almost stateless, society. The politics in the book are very much built around the ideas espoused by Professor de la Paz. In the modern day, the story is somewhat understood as the tale of a libertarian revolution. Interestingly, the story itself precedes the common understanding of modern libertarianism, and the Professor calls himself a "Rational Anarchist" when describing his political theory. It can be best summed up with two quotes:

A rational anarchist believes that concepts such as "state" and "society" and "government" have no existence save as physically exemplified in the acts of self-responsible individuals.

I will accept any rules that you feel necessary to your freedom. I am free, no matter what rules surround me. If I find them tolerable, I tolerate them; if I find them too obnoxious, I break them. I am free because I know that I alone am morally responsible for everything I do.

These ideas hew very close to libertarian socialist philosophy (especially radical ideas of minarchism where the state is hardly needed) and in that vein the story is interpreted through numerous different philosophies as representing their ideals. However, anarchy and libertarianism can be a slippery subject. The story itself probably can have its politics boiled down to the acronym TANSTAAFL. There ain't no such thing as a free lunch. Though sometimes erroneously credited to Heinlein, it is a phrase dating back to the 1930s. This can roughly be translated down to, nothing comes for free, or there's always a hidden cost. Which is always going to be a good way to describe revolution.

But these hardly distract from the story. The revolution of course is not bloodless or simple, and it really does turn around in numerous surprising ways. It managed to surprise me a few years later how much I had forgotten about the intrigues of the revolution and the delicate and difficult decisions being made in the messier parts. (Indeed one interesting sub-plot revolves around keeping an eye on Terran scientists so they don't send a message back to Earth). These little details really sucked me into the book, and made rereading it so much more enjoyable.

Despite being written in 1966, three years before the first man would walk on the moon in 1969, it gets a remarkable number of things right. The cities are built underground in caverns to protect them from meteor strikes, the microgravity requires a certain way of walking and landing and communicating on the moon is done through hard landlines between the different settlements. The strain of living in low gravity and then experiencing Earth's higher gravity is also explored quite well. Though he did get some things wrong as science marched on, it managed to be remarkably prescient about many modern theories of living permanently on the moon.

Adding all this into the human element, the people who make up our main cast and supporting cast and the eventual love they come to have for each other, makes the revolution completely heart wrenching in its aftermath. I won't spoil any details, but it doesn't give our characters everything they might have wanted.

It is deservedly known as a science fiction classic. I would honestly recommend this to anyone who loves good science fiction, for it manages to tell an amazing story in a now very familiar location. If you've never read this book before, go pick it up and enjoy it!
Posted by Stienberg at 12:01