Another one not for the re-read, but this is yet again a great science fiction work! Perhaps unsurprisingly, it is another by Kim Stanley Robinson. I take you to the future, three centuries from when it was penned. The exciting world of 2312. 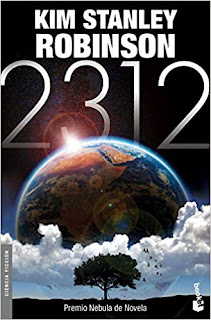 We start our primer to the 24th century on Mercury. There the great mobile city of Terminator crawls ahead of the ever pursuing sun, allowing for the permanent colonization of the planet. Enter our protagonist Swan Er Hong, an artist on the planet out doing a 'sun walk' a journey of staying just ahead of the deadly star. Her famous grandmother, Alex, the Lion of Venus, has just died. Swan is gathering in the city with her family and friends, when she meets with a representative from the Saturnian league a 'toad faced' fellow named Fitz Wahram who was also a friend of Alex's. Even before the funeral is complete however, things get strange. An inspector from Interplan (think the Space Police) Jean Genette, comes asking if Alex had any enemies.

Little does Swan know, but her grandmother was involved in a Solar System spanning plan. It centered around the Mondragon Accords, which were to develop a semi-planned economy for Earth and all the settled planets, moons, and terrariums which act as floating habitats for humanity in the void. All of these are looked over by qubes, small quantum computers with advanced AI in them. The AI though, are not truly self-aware. But if that is the case, why was Alex so intent on keeping her work away from the artificial eyes of qubes? And why did she keep so much hidden from Swan and the qube implanted in her head, Pauline?

This sparks a long journey around the Solar System, from the mobile city of Terminator on Mercury, to the great ridge covered moon of Saturn, Iapetus. We take a floating tour of where humanity has advanced to in the 24th century and get to bask in how far we have come, but also how far we have fallen.

We see that Earth is still a place of extreme inequality, and great desperation. The sea level has risen by 11 meters in the past few centuries, flooding great metropolises like New York, and sending entire coastlines to the bottom of the ocean. The only ice sheets left are in Antarctica and Greenland. Meanwhile the ravages of global warming have led to mass extinctions, great desertification, and billions dependent on food grown in the many thousands of terrariums and then shipped down the orbital elevators to feed Earth's masses.

Meanwhile, in space those living on the terrariums have lives of great luxury. They have access to quality healthcare, need to worry little about their material health, and can afford to undergo many progressive gene therapies to live long and happy lives measuring over a century, or in some cases two and maybe more! Mars has been terraformed, and Venus is well on its way to being turned into another Earth, but one with a substantially higher gravity. The moons of Jupiter and Saturn are being colonized and terraformed, and the future outside of Earth seems very bright.

Naturally, this sparks resentment from peoples on Earth. They feel left behind or resentful of spacers, and that they live in luxury while the majority of humanity does poorly. The spacers then feel that the Earthers are ungrateful, backwards and unwilling to work to solve their own problems.

This is one of the central conflicts of the story as Swan and Wahram go back and forth between the habitats of the Solar system and Earth, trying to continue the secret project that Alex's grandmother was working on. But the issue of the qubes also looms large throughout the entire story.

Exploring the Earth and the settled solar system in this story makes for an engaging read, and that we do it through the eyes of two characters who alternately detest and desire one another, is pretty fun.

Swan is a very headstrong, antisocial, and - even by the standards of the 24th century - heavily augmented woman. She has undergone numerous gene therapies, had a qube directly transplanted into her head, and even eaten lifeforms found on the oceans of the moon Enceladus. With all this, she has trouble with people, and a difficult past which continuously haunts her, giving her trouble beyond her comfort zone. It also makes her short tempered, and not extremely understanding of the motivations of others. This proves quite capable of biting her in the ass on occasion.

In contrast we have Wahram, who is slow, methodical, and not nearly as ready to jump into extreme situations. He has lived for years around Saturn, working as necessary, and supporting a small family creche he is apart of. His friendship with Alex was because he believed in her vision of the Mondragon Accords unifying humanity through an interdependent economic system, and using the terrariums to help keep species that had gone extinct on Earth alive. Whether Swan can live up to that vision is anybody's guess.

The relationships of these two is central to the plot, making for a kind of cute read.

Our supporting cast is fairly small. Mqaret, Swan's grandfather, plays a the role of an elder father figure to Swan, helping her in the background. Jean Genette, the Interplan inspector who is galavanting about the Solar system on his mission to find out if Alex's fears of the qubes has any basis, and finally Kiran, a boy who rescues Swan from the slums of New York for rescuing her, and he is inadvertently thrown into the chaotic workings of the governing body of Venus, the Venusian Working Group.

Each character has an important role to play in the overall plot, and they do each help round things out to a satisfying conclusion in the end.

The plot itself is not what one would call, action packed. It is more driven by drama, emotional soul searching, and trying to piece out whether any of the main casts fears are actually there at all. It does make for some interesting overarching mysteries. We do have some very fun action sequences though, and bits of adventuring and derring do which would not look out of place on older classics. The scenarios will look very familiar to other sci-fi lovers!

This story though, is largely one which revolves around an interplanetary adventure and romance. It manages to tell both stories quite well I think, and I did not find myself getting bored, even if I admittedly skimmed a few more emotional soul searching internal dialogues. The interactions between the lead characters were always fun, and made for good ways to build both tension and the world around them. With the secondary characters fleshing things out, an amazing story came to light as I progressed through their adventures.

The way the story is set, with chapter headings telling you who we will be seeing and then extracts from in universe documents giving important context and background, the reader will never feel totally lost.

What really sucks you in is the amazing work done on building this vision of the lead up to the year 2312, how the Solar system works, and an honest examination of how, despite all the progress, humanity has not achieved utopia. This was a futuristic setting which I couldn't get enough of. It was familiar enough that I could grasp much of what was going on, while being alien enough that I had a little trouble wrapping my head around many of the concepts in it. That said, it was amazingly conceived and I loved all the detail that went into crafting such a complex and nuanced future, but one not so alien as to be impenetrable. It presented problems, and was bold enough not to decide on easy solutions.

Anyone who earnestly enjoys good science fiction would also be sucked into this world I think, and I believe you too will be happily drawn into the world of 2312. Please enjoy this one!
Posted by Stienberg at 22:14