So, we come to the first book of the 2020 re-read. I originally read this novel in the span of three days while I was in Australia after my brother recommended it to me. I was a bit skeptical, but I picked it up and I literally couldn't put it down. I don't think a book has ever had me going "holy crap" as I finished chapter after chapter of the book as much as this one did.

That book, was Leviathan Wakes. 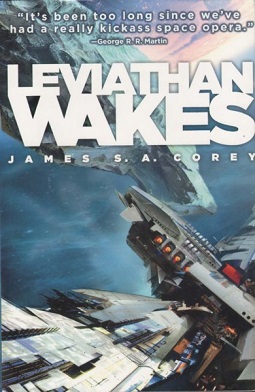 The premier novel in the Expanse series was actually written by two authors under the pen name James S. A. Corey, the pen names for Daniel Abraham and Ty Franck. The work originally began as a setting for a large role playing game, but author Abraham said "People who write books don't do this much research," and so the genesis for this now eight book series was born.

It is set centuries in the future, roughly in 2350. Earth supports a large and bloated population of 30 billion. Mars is Earth's wayward daughter colony and eternal terraforming project, or one giant science experiment. Meanwhile on the lesser asteroids and planetary bodies, Ceres, Ganymede, Eros and hundreds or thousands of smaller asteroids and stations, the people of the Belt struggle to survive in the most hostile environment known to man. But into all this, a massive spanner is thrown into the works by a man named James Holden.

The story is told through two viewpoint characters, the first being the XO on an old icehauler the Canterbury after being drummed out of the navy. Righteous and sure of humanities good side, he has a dangerous habit of speaking his mind too freely. Secondly is a native "Belter" and detective Josephus "Joe" Miller who works the beat on Ceres for the resident police force Star Helix Security. Cynical, jaded, and something of an alcoholic, he works to keep people breathing and enforce the laws on the Belt's busiest port when he gets a strange case on his desk.

With two characters who have such diametrically opposed views of humanity, it is fascinating to see them put in similar situations time and time again, while also overcoming amazingly Herculean odds to accomplish their goals. The two are perfect foils for one another, and I don't think I've encountered a duo like them for a while.

They fit organically in the established setting described above. It is a world rich with political tension, inequality and for the reader, utter wonder at how far it seems mankind has come in colonizing the Solar System. However, as they show, this isn't without cost as the Inner Planets (Earth and Mars) squat on the neck of the Belt (the various moons and asteroids) giving them no representation of their own. Instead a myriad of resistor groups has formed the OPA (Outer Planets Alliance), terrorists, pirates or freedom fighters and a government all their own, depending on who you ask.

Into this ugly mix is the destruction of Holden's ship the Canterbury, with only a small batch of surviving crew members, Naomi Nagata, Alex Kamal, Amos Burton and Shed Garvey, surviving as they were on a shuttle at the time (these secondary characters also helps round out the story as well) This one act kicks off a round of violence solar system wide, and poor Detective Miller gets stuck in the middle of it on Ceres with his Earther partner Dmitri Havelock.

Each chapter in the story ups the stakes further and further, ratcheting the tension higher in each chapter. Even the few precious scenes where the characters feel slightly safe are few and far between as they end up thrust from one system spanning disaster to another. Like I said, I was almost invariably saying "holy crap" as each one ended since things seemed like they couldn't get worse.

The interplay of themes like government, representation, freedom of information, revenge, coupled with Holden's quintessentially optimistic view of humanity versus Miller's pessimistic view of it presents a nice play by play between the chapters. With Miller at first analyzing Holden through various lenses as either an insane optimist or eventually or as a righteous man with a big mouth. When the two do finally meet face to face it makes their interactions just that much more interesting!

In terms of science fiction the authors have intentionally gone for 'Wikipedia level plausibility' being that the technology and ideas you see in the series are not so far-fetched that they distract you from the story while also being real enough they can work plot points out through contemporary understandings of science and physics. I appreciated that as it let me have a base understanding of the setting, as well as seeing what technically worked and guessing at how some events might play out. I ended up being pleasantly surprised more often than not.

This also shines into the action of the series. With ship to ship combat having to take into account things like high gee maneuvering, which could accidentally crush the human body. Dodging around point defense cannon shots, torpedoes and railgun rounds is serious business, but the forces involved are similar to those put on modern fighter pilots. Power armor also makes an appearance as the modern militaries want their soldiers to survive in the airless radiation of space. That makes gunfights even more interesting! Though old fashioned gunslinging is the norm for this first installment.

Quite honestly the interplay between characters and ideas, and the massive solar system spanning implications of the meta plot kept me hooked to the point I was just unable to set the book aside either the first or the second time. Even with a second, perhaps more jaded, read through I really can't say I find anything wrong with the book. It comes together on numerous levels, the story rising and falling, giving you time to breath and then whipping you forwards on a break neck pace. It just works in all the right places I think.

I'm glad that I started the year with this book, as it is definitely one of the best science fiction books I have ever read. It will forever stand out in my imagination as a book which has set the standard for stellar science fiction!
Posted by Stienberg at 09:00