My first review of 2020 is not on any of the books from my big re-read. It is instead one I began in 2019 but just finished now in early 2020. That book is another of Kim Stanley Robinson's, but on a different track. Here we follow people travelling across the interstellar void between the stars in a generation ship. They travel towards Tau Ceti, and aim to establish a new colony for mankind.

This story is Aurora. Published in 2015, it is a great take on the idea of a settler society sent out to colonize the stars on behalf of those from Earth and it tries to examine the plausibility and morality of such an action as well as setting out the plausibility of a functional generation ship.

Does it tell a good story and bring mankind to faraway places? Read on and find out! 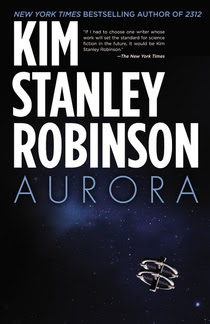 Now, I'm very interested in the concept of a generation ship, how it could be made to work, and how it could even stick on its original mission. I've been fascinated by the idea ever since I saw the show "Ascension" which deals with an interesting take on the idea. By its nature, Aurora appealed to me. An examination of a society which has grown up over a century on what amounts to an artificial floating environment in the depths of - for lack of a better term - a void is fascinating. I really do believe that the novel captures the challenges and problems in keeping such a society going quite well.

The unnamed ship is divided into two rotating rings (A and B) and each contains a number of biomes. These biomes have been designed to carry a minimum human population while supporting the maximum amount of biodiversity possible in a 2 by 4 kilometer space which can bring as much of Earth to their potential new home world around Tau Ceti as is practical while keeping up a good chunk of biodiversity to support the various ecosystems.

Our main protagonist is the daughter of the de-facto chief engineer of the ship Devi. The girl, Freya, is out main view point character besides the Ship itself. The ship is a sophisticated AI based on a quantum computer system. Even this AI (Ship) does not really know if it is self conscious or not, which forms a running background to the narrative which is rather fascinating to watch unfold as the plot goes on. Say one thing for Robinson, but he writes a damn fine speculative AI.

The plot follows Freya from her childhood in the biome of Nova Scotia to her eventual rise to the position her mother held and the leadership role that plays.

Though this is ostensibly a story about colonization of another planet, it deals far more with the ethics of a generation ship (even if the original crew were willing volunteers, is it just that their descendants must carry out their mission?) and the sustainability of such an endeavor. Over a century into the journey, the systems seem to be breaking down. There is legitimate fear that the people on the ship are de-evolving or undergoing serious genetic strain. Poor Freya is seen by her mother Devi as 'slow' in comparison to her forebears.

With space and carrying capacity on the ship limited, the population is capped at just over 2,100 people. This in and of itself is a cause of consternation and concern for many as they will be legitimately unable to start families or have children. It has led to problems in the past, and some even try to cheat the system - with occasionally fatal results, as in the case of the parentage of one character Jochi.

These struggles are all highlighted against the uncertainty of what their arrival in the Tau Ceti system will bring, and whether they will even be able to terraform the planet upon their arrival. The looming question of whether it will all be worth it hangs over them as it is a certainty that Freya's generation will be the ones who set foot on their potential new home world.

Despite this, only some of the novel is given over to discussing the issues of terraforming or interstellar colonization and much more is focused on the issues of keeping the ship viable, how such a society can function in the face of a complex and multi-generation mission and the ethics of such a plan originally.

In typical style, none of the characters we see are particularly deep, and much more time is devoted to the systems and problems facing the generation ship and the Ship itself in a slow evolution from an advanced quantum computer to a potentially self aware machine, even if Ship itself doubts the whole truth of this assertion.

The considerations of how exactly one would go about manning and sending off a generation ship, and how to keep it running are all very well explored. The potential pitfalls, the biological and potential generation problems are also examined in often grim detail. Even things such as missing enough of a noble gas like bromine for completeness sake is looked at! Would these small biomes be able to get away from the problems of a limited biosphere and small gene pool? Would humans be able to develop well on what is essentially a small island? We have some exciting rides and questions to keep us going to the end.

However, the ending ultimately fizzles out in comparison to the action of the second and early third acts in the story. Their are high stakes, but the issues, fates and even original ideas which launched the whole plot centuries in the past are not really explored, and we ultimately end up on a confusing series of incomplete feeling epilogues rather than a concrete ending for any of our characters.

While an exciting novel for its content, it does almost end up being a polemic against its very premise. There will be no spoilers in this review, as I would encourage people to look to the book to understand its arguments. I would recommend it to anyone keen to look at an interesting story of the ethics and logistics of a generation ship. Despite a strong opening, it doesn't quite stick the landing.
Posted by Stienberg at 11:00