Battle for the Wastelands

Recently I got to read a book I have wanted to read for a long time. Fellow blogger and writer Matthew Quinn had talked about his full length novel Battle for the Wastelands for many years. After a long process of submissions, Mr. Quinn finally went the self publishing route and made his novel available to the public! Here's my full review of Battle. 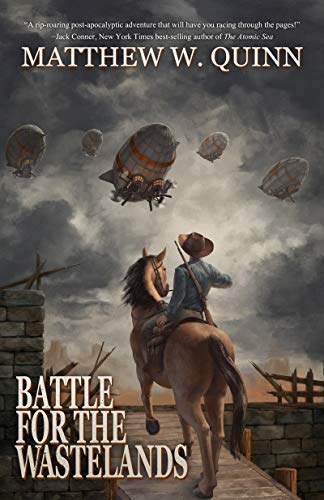 Set in an indeterminate period after a post apocalyptic event, we find our protagonist Andrew Sutter, traversing the wastes along the Iron Desert within the fertile Basin. His home. Carroll Town, is ruled over by the despotic and terrifying Flesh Eating Legion under the command of rebel turned warlord Jasper Clark. With a terrible drought afflicting them, a heavy tribute is demanded, sparking a minor rebellion and when Andrew takes up arms, he finds he might not know what true battle holds.

Meanwhile, the ruthless warlord Grendel, first lord of the Northlands, is struggling to hold his fledgling empire together. Though he has largely crushed all his foes, his underlings are now clashing with one another. It threatens to split his tenuous hold on the Basin lands into splinters and destroy everything he has built. Within his new realm he has friends and enemies. One being his concubine and former woman of the ruling Merrill family, Catalina, who seeks a way to plot against him. The other is Alonzo Merrill, leader of a ragtag rebel army opposing Grendel and his cronies, but fighting a losing war along the Southern Wall, a series of fortifications designed to drive the remainder into the desert.

Can the rebels manage to beat the first lord of the Northlands? Or will they be swallowed up by the progress of empire?

I definitely found that the novel was fast paced, which was good for the amount of information you receive when reading it. It starts off with a brief introduction into the Iron Desert and Caroll Town, but then its hard fighting and lots of dying!

Andrew is, without a doubt, our main viewpoint character. He is the audience surrogate seeing the issues of the world at large. Young, headstrong, and very unsure of himself he finds himself thrust into a war he barely understands until it gets personal. Seeing the despotism of Grendel's empire up close, he throws himself whole heart into fighting it.

While I enjoyed Andrew, I actually don't think he was the most interesting character in the book. His young naivety and limited scope for viewing the problems in the Basin as a whole, made him have only a one track mind. That is, the specific struggle against the Flesh Eating Legion under Jasper Clark. This was an engaging story, with a great cast of supporting characters (who had a terrifying life expectancy) that kept me hooked.

Many of Andrew's scenes were where the action in the story shone through, and it starts off bloody. It then gets up close and personal. Largely, this is where the meat of the story excels, with it being well described and satisfyingly bloody. From knife to bayonet wounds, to the after effect of mortar bombardments, you aren't left in the dark about the horrors of combat. Though after a point, some of the description did feel perfunctory, especially in the first third where it didn't come off as quite as strong.

The use of old vs. new style weapons was pretty clever. The dirigibles flying around give any enemy a massive advantage in both scouting and firepower, but there are ways to defeat this. The most obvious course is to have a dirigible of your own, but there are other ways. I think one of my favorite visuals from the book is when Andrew and other Merrill troops are waiting behind a rise in a hill, all rifles aimed skyward with a 'balloon popper' cannon to try and blow a patrolling dirigible out of the sky if it spots them. Coupled with the rarity of Old World weapons (automatic rifles and machine guns) you get some pretty awesome steampunk action with bolt action rifles going against SAW weapons on occasion and all the imbalances that creates.

Perhaps the most interesting aspect though, is the politicking in the villain camp. While the good guys are (largely) united in purpose, the bad guys are quickly devolving into fighting amongst themselves. Grendel is after all, a warlord, and the people he works with or conquered were also warlords. And much of Grendel's time is now spent dealing with his uppity subordinates.

In the neo-fuedal future setting of the world, this works quite well. This is why I really appreciated Grendel as a character. All of Grendel's scenes are deliciously Machiavellian as we see the tyrant plotting and outsmarting opponents while trying to crack the problem of how to pass on his empire to his heirs. His son Falki (who will be starring in an upcoming novella) is something of a pain in the ass for the tyrant. Though Falki is clever in his own right, he is still a boy used to immature outbursts and doesn't quite understand the fine art of terror and politics the way Grendel does. The two competing view points between the two makes for some nice tension in Grendel's plot, and it makes me look forward to how they will play out in the future.

Grendel of course, keeps a bevy of concubines, and they too have their own politics. Trying to get their sons higher in the line of succession, and in Catalina's case, trying to get him to remember his Merrill heritage rather than the role Grendel is trying to set for him. Of course, Grendel is not entirely blind to that either. Catalina will hopefully be a major character in the future, and I look forward to seeing her use her position to her advantage as well as she possibly can.

In these scenes we also get useful world building. We learn how Grendel runs his empire, the various (and myriad) factions he employs, and even delightful little details like union/guild systems which can do things like go on strike! It makes for some fascinating interplay, and at the end of the novel seems to be setting the scene for intrigues and struggles for the good guys! I really look forward to seeing more of that in the future.

The one place where I think the world building did not shine though was establishing the overall setting. I had actually believed this was a future Earth, and while I couldn't match the geography in my head, things began to break apart as I read more. The exact nature of the Old World is left mysterious, and with little tell for how it fell apart or what technology was left behind. Much of this was based off of the world 'moving on' in the Dark Tower series, but I think that more explicit calling to the different nature of this world and then a smidge more info or theories about the Old World would have helped ground the setting.

Enjoyable little nods to the Old World abounded, one scene where Andrew is wandering through the Iron Desert and finds the remains of an abandoned house was a fun aside. The weapons and their rarity/effectiveness was a fun jump in any action scene. I did find myself hoping that other Old World tech which wasn't just weapons would come around, and maybe that will be a future plot point. Fingers crossed.

If I had to make one criticism of the novel, it was that I found the first act to not be as strong as it might have been. Andrew's early arc is well established, but we wait a while for anything to come involving Grendel or the Flesh Eating Legion (which itself could probably have been fleshed out more too) and their overall place in this world. Once we get past the initial Caroll Town arc though, the story picks up, snagging your attention and never letting go. The second and third acts I breezed through as I had time.

As a story though, it makes a valid argument for steampunk not being dead or unusable as a genre. Dirigibles, trains, telegraphs and machine guns are all intelligently and compellingly used. The Western look and feel is never wasted, and the clever plots and compelling characters are well put together. If you're looking for some great action and a really, really fascinating villain, I cannot recommend Battle for the Wastelands enough. And with a novella coming out in the near future, you won't be waiting for more from this fascinating world! Check it out!
Posted by Stienberg at 12:20