I've reviewed the work of Matthew Quinn before on this blog, and I'm pleased to announce I'm reviewing another great story of his! It's an...unconventional horror story to say the least. What happens when you combine mutant badgers with pissed off little people? You get Little People Big Guns! 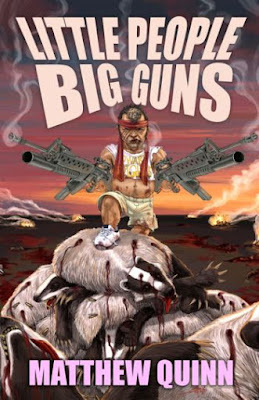 I'd originally seen Mr. Quinn pitch this on his blog some time ago, and while the premise sounded interesting, needless to say, I was skeptical at first. However, he's done some great horror in the past managing to combine fascinating time periods and concepts pretty well. So of course I was going to read this!

Set in McTavish County Oklahoma, we follow members of the McTavish Little Person's Association as they mourn for their friend Gordon, killed by wild animals. President James is a very devout Catholic and is dealing with the loss while trying to keep everyone else calm in a trying time for the small community of little people in McTavish County. Former president Murphy thinks - not entirely wrongly - that the county won't be moved to action by this crisis and that they ought to take matters into their own hands. He sees the county as inefficient, and sincerely believes that the death of one of their members won't be taken seriously by the community at large. Both men arguably have the right of it in some way, and this little (no pun intended) clash of personalities adds some depth to each character.

The supporting cast includes other members of the Little Person's Association, members Marquise and Angela. Marquise is another outspoken member of the group who tries to get along in the world any way he can, being a delightfully sexually out there character. His lifestyle puts him in almost constant conflict with Murphy who is very outspoken in his views and doesn't really care who knows. Angela, the only woman of the group, is someone who suffers both from being the only woman (and so treated a little patronizingly by the men) and also with the many other problems faced by the little people in the area.

Put together, they won't take CRAP from anyone. Especially not any giant mutant badgers running amok.

This was a very fun book. I was laughing out loud when I read it, especially from the earnestness of the characters and the amazingly funny lines and terrifying situations they were in which were played absolutely straight. It was the characterization that made this work. James is a very strict Catholic characters, and the numerous asides in his head and discussions about religion beefed up his character. His determination to do right by everyone, even if that person is trying to kill him, puts him at odds with the more abrasive Murphy who is very much the type to go for the throat, even if its a little extra-legal. Murphy's determination to take action in their own hands makes him a powerful foil for James. I really enjoyed how the two played off of each other.

One thing which makes this story stand out is that it really makes you look at the world from the perspective of a little person. All the main characters are those who were born of very short stature or with dwarfism, or to use what is considered a pejorative among the community, midgets. This opens a whole new perspective on the world for readers which makes all their actions, from walking and running to getting attention from folks (big people) all the more interesting. Honestly, its a very fresh view on horror which made me think, something I like.

In doing so Quinn  had to write the action scenes under some interesting limitations. From firing guns to driving cars, you have different priorities. I liked how it brought these issues to the forefront and made me consider how the characters would solve various problems.

The monster badgers were a wonderful outside context problem. Who on Earth would think of using badgers as monstrous creatures? It is hilarious when you find out who the villains are. The rather comically extreme views had me laughing out loud while finishing the book.

One lovely improvement is how the author handles the female characters in this one. The character Jane gets a well rounded attitude, and some redeeming qualities, while not quite as well rounded as the male protagonists, she manages to be an engaging character who turned out amazingly well in the finale. Unfortunately, the character Angela, still came off feeling like the token woman on the hero side. She also played a part in the finale, but one would almost be forgiven for forgetting she exists in this work.

I genuinely enjoyed this story. It was funny, scary and well plotted, which made me just binge read it all the way through. For a short and fun read you can always count on Matthew Quinn.
Posted by Stienberg at 15:30