The Beast of the Bosporus, Matthew Quinn

Well it's that time again readers! Another review! This time though I have the pleasure of presenting fellow blogger and writer, Matthew Quinn's work. I am happy to say that Mr. Quinn was my inspiration for seriously beggining my own written works and he was one of a number of influences in my decision to start this blog! I follow his blog The World According to Quinn (and you can see his recent posts on the right hand side) and I highly encourage readers to follow him! If you haven't done so already do so now! I would encourage readers to be on the lookout for his works in the future!

Mr. Quinn's most recent work though, is taking an old favorite and depositing it in a completely new setting. Today I present to you The Beast of the Bosporus! 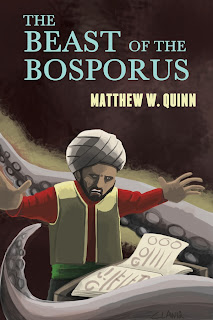 The story adds to the long rich history of the Cthulu Mythos and takes it to an exotic, and distinctly un-American setting, and the first to set it directly in the Muslim world. The medieval Muslim world! The story picks up after the Battle of Lepanto, and the Ottomans are rightly worried about the encroachment of Christian forces on their territory and whether this could damage their control on the  Mediterranean. In order to prevent this we see the Grand Vizier Sokullu Mehmed Pasha forced to come up with some rather...creative solutions shall we say readers? To that end he contacts Jelal, a creepy collecter who knows of a book which promises great power to those who read it. Intrigued Mehmed begins to pursue the offer unaware that it may lead to some very serious consequences with cosmic implications. 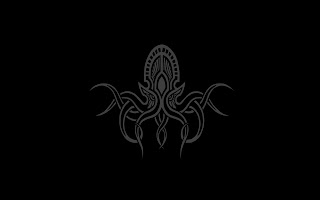 Now to break into my review style!

As previously mentioned this story takes the well known Cthulu mythos and proudly goes where no writer has gone before! Setting it in the Ottoman Empire and blends the exotic flavour of the Near East with the cosmic horror of Cthulu and his spawn.

The portryal of the Ottoman Empire (or Sublime State as it is so wonderfully called) is a fair, open and entirely apolitical one. A very refreshing view in today's world where more often than not any character is open to demonization if they are shown as a Muslim. Instead here we get an open cast of scheming politicians, honorable court nobles, and brave warriors. It is a varied and diverse cast featuring characters from all over the Empire. We have Janissaries, Armenian merchants, Turkmen, and Persians presented and all within the political framework of the Ottoman empire.

Using the Sublime State as a setting also gives us an example to see how a culture that isn't upper class American or Christian would react to the encroachment of the Old Ones. Unsurprisingly it is with horrified revulsion and disgust. The uniquely Islamic influences and actions are interesting refreshing and a joy to read. It shows you that the author has done his homework for this piece. Quite rigorously in fact. This is fabulous as the level of detail it adds to the story is just beautiful and we see he has quite keenly grasped the historical tension which drives the plot and the rich flavour and ideas behind the people ruling the Sublime State. As a history buff and lover of things exotic this is fascinating to read and I absolutely love it!

Then of course we come to the meat of the story, the cosmic horror of it all. This is established by once again going to the forgotten and lonely places of the world and some snooping around where one should not be snooping. This leads to a beautifully done scene which I won't spoil for the reader which is both masterfully scripted, and completely chilling at the same time. Needless to say it gets the job done in establishing how our story unfolds.

From here the horror truly begins and Matthew weaves a delightfully disturbing tale of half remembered visions and waking fits of near madness as the insidious grasp of the Old Ones begins to take hold of the characters minds. The way he establishes the thoughts of his characters and how our main character Mehmed believes he will be controlling the monster and his efforts to try and stave off the insanity that tries to engulf him are well written and professionally narrated so we see the Pasha's trip down the rabbit hole.

Also there is a wonderful subplot of tension between Mehmed and Joseph Nassi for influence in court. Established right away, we see that there is a power struggle between the two and they each wish to influence the Sultan and have their own plans and ambitions furthered.

Finally the story comes to a shocking, and alltogether satisfying conclusion which I don't think anyone could complain about, and leaves you wondering where reality ends and madness begins.

To be truthful I really don't have much to criticize in this story. There is no bad characterization, the plot is solid, it flows easily and has a wonderful written style. Though if I absolutely had to make a few quibbles there are two things that I think might have been different.

Mr. Quinn did seem to put too much effort into describing the beasts though, while cursory description is of course necessary, I think it may have been better had be stuck to vague and general outlying details while concentrating on the characters complete incomprehension and physical revulsion at what they are seeing. This is a great way to both establish just how foreign the Elder beasts really are, as well as let the reader's imagination fill in the disturbing gaps which increase the terror. (Not that they weren't terrifying mind you).

Something we might have seen more of was good in depth descriptions of what each character is doing and how he precisely reacts to an event, from their facial expressions to whether they are gripping their chair in white knuckled terror. The description was good but I would have liked to see a bit more depth to it.

These minor descriptive issues aside there is nothing bad to say about this story from me. It entertained, chilled, and amused me.

Well ladies and gentlemen I am about to do something unheard of yet on this site, I will give out a five star rating. This story does exactly what it sets out to do. It scares, thrills and excites the reader and keeps him on his toes as he wonders how things will play out in the end. The story is short, interesting, and keeps you sucked in all the way through! I read it all in one sitting too! It satisfied my love of Lovecraft and makes a wonderful addition to the overall mythos of the Cthulu series. I'm quite satisfied with the results!

That being said Mr. Quinn is a writer to watch, as I have mentioned before he has a steampunk novel that will hopefully be coming out some time in the near future and he has a number of other projects on the go as well. Keep an eye out for this up and coming author ladies and gents! You won't regret it!

I highly encourage readers to go to Amazon and get this story which can be found in his excellent Flashing Steel Flashing Fire anthology and buy it! Support an up and coming author! It's the right thing to do! You won't be disappointed! I know I wasn't.

So again I say five out of five stars for this wonderful piece of short fiction. Until next time dear readers, until next time.
Posted by Stienberg at 19:34