On December 27th, 2018, I went to see a film with my family which I had originally seen the trailer for in October. That trailer was for the film Vice starring Christian Bale, Amy Adams, Steve Carell and San Rockwell, among others. Written and directed by Adam McKay (known for such classy films like Talladaga Nights, Step Brothers, The Other Guys). It purports to tell the narrative of the rise of one of the most infamous and powerful Vice Presidents in American history, the VP to Bush Junior, Richard "Dick" Cheney.

With its all-star cast, interesting subject matter, and definitely controversial interpretation of the VP, I was definitely interested to see the story it had to tell. The film begins by openly stating that they had a difficult time gathering information on one of the most secretive VP's in history, but they did their best. 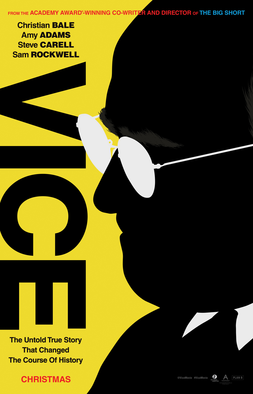 There's a cold open where the VP is evacuated to the bunker beneath the White House in response to the September 11th Attacks, and where he gives unilateral authority to shoot down planes to Donald Rumsfeld, ignoring the fact that he does not have authority from the president to do so. Setting the stage in 1963, we see a younger Dick Cheney (Christian Bale) being pulled over for drunk driving.

A sudden flashback and flashforward is not the first time the film will play fast and loose with the timeline for 'artistic merit' so be prepared for a few jarring moves backwards and forwards. This all helped by our fictitious narrator,  Kurt, who relates much of Cheney's life and an interpretation of events.

We pick up with a tale of Dick marrying Lynne Cheney, but failing out of Yale and barely managing to keep a job due to a combination of alcoholism and constant brawling. Berated by his wife, he vows to do better. Jumping forward once again, we see he is a congressional intern and is falling under the wing of then economic adviser to President Nixon, Donald Rumsfeld. Under Rumsfeld's tutelage he becomes a canny political operator, and one of the few men who survives the Watergate scandal. Using this to climb the ladder of political power, he is knocked off by the election of Democratic President Jimmy Carter, stalling his journey into the seats of national influence, for now.

From here we see Cheney's emerging heart problems and his time going forward to becoming Vice President under George W. Bush. All narrated by our fictional narrator Kurt, whose role becomes much clearer later on.

Now it must really be noted that from here on out, the film, while it has made no bones about having a bias against Cheney, goes into overdrive to frame the various scandals surrounding the man as a bid to control American policy through a nitwit president.

McKay's work in the past with mostly comedies (and notoriously immature ones at that) shines through at times. Some of the jokes do feel weak and childish, but for a film coming from a primarily comedy producer and director, it is shocking he delivers some great scenes and chilling pieces of dialogue depicting this man. As someone who really doesn't like any of his previous work, that he manages to deliver moments worth of House of Cards is very impressive.

Despite the intention to create a dramatic film, elements of farce or parody seep in. Whether being overly dramatic intentionally or unintentionally, scenes seem written around what is amusing rather than what is going to grip the audiences attention. This creates mood whiplash in the audience as you may go from a scene portraying torture to witty asides by our narrator and intentionally comedic commentary. This can work, but here it feels as though McKay is sticking to his strengths.

While Vice does make sure it lines up with known facts, it has no problems with filling in the blanks about Cheney's motivations and actions with informed speculation. So anyone who was predisposed to like Mr. Cheney will find the film a total hatchet job, while anyone who is opposed to him will see it as a]well informed assessment of the man. The film even pokes fun at its obvious slant by taking a not so subtle swipe at the audience in an end credits scene.

Now we could debate the known facts, the innuendo and the speculation around former VP Dick Cheney forever, but that really doesn't answer the question of whether this film is any good.

For my own personal taste, the way the film leaps back and forth throughout the timeline in delivering 'artistic' speeches seems a bit contrived, and sheds no real light on the supposed motivations of Cheney as a character. Cutting to scenes of his unruly younger years, spliced with his early years in the Nixon White House and accompanied by powerful poses of the elderly man we all know in the halls of power really don't add much to the film. Some attempts to inform his motives also fell a little flat, as they passed into parody territory which detracted from the film at inconvenient times.

Some scenes are darkly humorous, such as when Cheney's heart condition is often played for laughs to break moments of tension, or Rumsfeld's character is a hoot for how cynically irreverent he is. However, in some scenes, such as when the film breaks for Dick and Lynne to speak to each other in Shakespearian verse, go on too long and seem unflattering to the overall pacing of the film. (Though McKay has a thing for this kind of dialogue, and his ending scene echoing Richard III works well).

The acting, though, is phenomenal. Bale comes to life as this reserved, powerful and calculating character. You do feel as though he is playing a scheming, flawed and power hungry man which is echoed on by Adams portrayal of a powerful woman who seeks to advance through her husband, each using the other to bring their dreams of power and influence into a reality.

The supporting cast also bring this tense Washington gang together. Steve Carell as Donald Rumsfeld is an unexpected treat, as he goes from fawning mentor to betrayed underling across the decades. Bush Junior by Sam Rockwell is good, but genuinely unflattering to the former president. The pained portrayal of Colin Powell by Tyler Perry of a man trying to reign in the excesses of a power hungry cabinet member while obeying the orders of his President is endearing, and does make you feel for him despite the implication he was betraying his integrity by carrying out the tasks assigned to him. Justin Kirk as the scheming sidekick Scooter Libby makes one think of the dead eyed Steven Miller who goes to bat for President Trump every so often.

Though Bale and Adams steal the show, one cannot overlook the performance of Allison Pill as Mary Cheney. A story the film plays to the hilt is Cheney's unwillingness to compromise the support of his daughter despite her being a lesbian, something notably opposed by the right-wing Cheney also supports. Her support for her father and her initial troubled coming out are all powerful scenes, making the ending of that troubled relationship all the more meaningful.

Powerful performances as those delivered by Bale and Pill are why I think this movie ought to be seen. Bale is amazing on screen, jumping into this persona with gusto, which should be applauded. It really does deserve every award it has been up for.

Ultimately the film, though not without flaws, will be enjoyed based on the audiences political leanings. It has been divisive amongst critics for that reason, though I dare say not that reason only. Some jokes and scenes are legitimately hamfisted, some of the comedy fairly weak, and portions of the script could certainly have been improved upon. The acting saves it from being a mediocre, while showcasing a series of definitely award winning performances.

For Christian Bale's act as one of the most powerful VP's alone, this film is worth watching at least once.
Posted by Stienberg at 07:47