Recently I had the absolute pleasure to watch 1940's Rebecca directed by none other than that supreme suspense shooter, Alfred Hitchcock. As perhaps is no secret, I'm a huge fan of retro films, whether colored or black and white. Alfred Hitchcock of course, is a film giant who is well known for his mystery and suspense. The book which Rebecca is based on is - criminally I am told - unknown by the greater public nowadays. Penned in the 1930s and published in 1938 by Daphne du Maurier, it tells the tale of all the tragic goings on at Manderly, the ancestral home of the de Winter family.

That the book was an amazing success would be an understatement. Going from smash hit to box office in two years is pretty exceptional in this time period. What was also exceptional was that Alfred Hitchcock, who wanted to make the film more 'funny' was told no. One just didn't do that to Hitchcock! With that in mind however, Hitchcock still delivers his classic thriller drama and shows off some amazing camera work in this film! It won two Academy Awards, and in 2018 it was chosen for preservation in the United States National Film Registry by the Library of Congress as being "culturally, historically, or aesthetically significant."

Beginning in the South of France (as one does in the 1930s when dealing with the British upper crust) at Monte Carlo, we come across our nameless protagonist (Joan Fontaine) as she serves as a paid companion to the stuffy and overly chatty Edythe Van Hopper. One morning, while out for a stroll, she oversees a man she assumes is moments away from commit suicide, so she calls to him. The man, visibly annoyed, tells her to mind her own business, but does not jump.

She next encounters him with Edythe, and learns that he is in fact Maximilian de Winter (Laurence Oliviere) the heir of the great de Winter family. Our nameless protagonist is timid and used to being pushed around, and Max, as he likes to be called, is forceful in his ways. However, he takes her on a whirlwind romance and, unexpectedly, asks her to marry him.

From there, she is whisked away to the Manderly estate, the realm of the great de Winter family. There she is introduced to the eerie Mrs. Danvers, the matron of the household staff and begins to see that tragedy haunts the halls of Manderly. A specific specter lingers over her as well, that is the ghost of Maxim's former wife, the eponymous Rebecca.

The film does an excellent job of ratcheting up the tension from the opening shots, to the claustrophobic moments where we zoom in on a character's face to see their terror written plainly across it. The atmosphere and the acting is all geared towards making you fear for the poor nameless protagonist as she is thrust into a new world which is strange and alien to her, and one haunted by a vengeful dead woman.

Fontaine portrays her nervous and bewildered character well. She has nervous ticks, slouching and constantly rubbing her hands together when feeling stressed. Cringing away from others, but especially the terrifying Mrs. Danvers who proves to be her indomitable adversary. 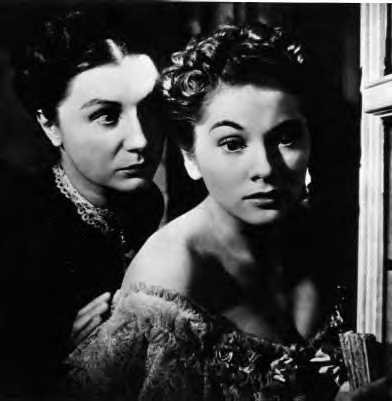 Mrs. Danvers (played by Judith Anderson) becomes a horror in her own right. While outwardly severe and at least maintaining the facade of the new Mrs. de Winter being in charge, she bullies and cajoles Maxim's new wife and attempts to drive her away. She is fanatically loyal to her former employer, even after her death.

Rebecca is a phantom in this film. Having died one year before the events of the film we know her only by her reputation and the effect of even mentioning her to Maxim has. Her rooms in the West Wing are all off limits, and maintained by Danvers as a mausoleum to her deceased employer. Her grace, beauty, and effortless excellence is often commented upon in relation to our poor nameless protagonist.

Perhaps the best scene in the whole film is one where we are tracing Rebecca's last steps. Almost done entirely in narrative, with the rare presence of an actor, it uses the camera, props, and the rising and falling in the voice of Maxim to stage and follow the scene. In this scene, we get a sense of the never seen character, Rebecca. It is, put simply, a masterpiece of film. You are lead around and can practically picture the character there, even though you never once see her directly in the film. The narrative is so gripping and intense with revelation that you cannot look away.

Hitchcock of course, does an excellent job setting atmosphere with his work in the film. From creepy dissolves where Mrs. Danvers ghostly face fades menacingly into another object, to well cut footage of characters in states of shock, anxiety, or grief. With less camera angles than a modern director could manage without, he uses easy shots to capture your attention and fix you on specific points within range, all the points he wants you to see. His method of shooting the film "in camera" was designed to make the film one seamless production from start to finish. He rejected some of the more melodramatic suggestions of the producers and manages to create a grand spectacle of cinematography.

Of course, the film is not completely faithful to the novel. While there is heavy emphasis on the perfect nature of our ghostly Rebecca and the emphasis is on our nameless protagonist, each fall short of du Maurier's vision. Her work wanted to emphasize how different Rebecca was from the standard female protagonist (while also making her something of a victim) and using our nameless protagonist as a victim of her society, being dominated by her husband, who must have things just so. This sadly is not picked up on by most, and the protagonist becomes attached (perhaps from Stockholm Syndrome) to Maxim and hopelessly devoted to him.

Oliviere plays the forceful and haunted Maxim well. Blustering between goodnatured enthusiasm to temperamentally domineering, going into a frenzy when he is reminded in almost any way of the dead Rebecca. His brooding nature is revealed gradually throughout the film, but he is never anything but controlling in his mannerisms.

The supporting cast is well rounded, from Maxim's devoted servants and to his manager and friend Frank Crawley. They all bring their subtle and powerful moments to the story.

The score, while appropriate for a 1940s audience, will probably grate and frustrate a 21st century audience. Relying on string music to bring in the tension, it is appropriately discordant at times, while also seeming confusing and out of place at others. It was an issue in evolution and though I do understand how it is supposed to work, I find that my ears just don't like string music in supposedly comforting scenes vs tense ones.

Rebecca, though, is a great film if you're looking for something suspenseful and shocking. The twists are all amazing, and you will be on the edge of your seat as our poor nameless protagonist tries to unravel the mysteries of Manderly. Another retro film I encourage you to see.
Posted by Stienberg at 08:00