This is a big musing of mine recently, and I thought it might help to get it down on paper as it were. One of the things that people can usually handwave or sidestep in science fiction epics is the concept of interstellar war. In some series it can make sense, but in others, not so much. When fighting aliens it tends to be a given, we want the same real-estate, they find us objectionable on religious/philosophical grounds, ect. With fighting other humans the same does not necessarily hold true.

Sure we might fight over the same resources, but absent some major justification why bother? Sure an independent space power would be capable of colonizing or utilizing its resources better than one being forced into a subservient position? Or even a single system star nation would be able to happily exist on its own systems resources. Why assemble a large expensive space fleet for an invasion of another? What is the benefit?

There are some answers to this. 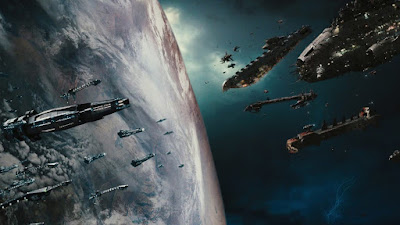 Much like the aforementioned aliens, humanity might clash for political or religious reasons. Even at interstellar distances mankind might be petty enough over doctrinal opinions or political differences to be willing to go to war. We have certainly done so on Earth. If rather than a united whole humanity begins the colonization of other star systems as fractious alliances of petty nation states why wouldn't this happen one has to ask?

One reason I personally believe would be probable for mankind to engage in such wasteful wars amongst the stars is the issue of control. The desire of say, Earth to hold its wayward colonies under its sway. Perhaps two neighboring systems become covetous of the others superiority in easily accessible resources. Maybe one system is located on better ground for a hyperspace highway and the other system wants better access to that trade?

The possibilities are legion, and I daresay that rather than Gene Roddenberry's utopian ideals of the future with humanity as one big happy family, we would find ourselves finding reasons (petty or great) to fight one another. This is perhaps why war stories, even in space, remain popular. Humankind fighting and exploring why humans fight is going to be a popular topic of fiction for a long time yet.

Despite how horrible, cruel, and oft times pointless war is, we still enjoy reading about it. Sanitized of the blood, bodies, broken homes and families, it is an exciting prospect to read about. That being said, some authors do manage to drive the agony of war home, and those authors should be extolled for that. War is a strange phenomenon, as we find it both glorious and revolting. War among the stars with weapons far more powerful than those we have today it logically follows, would be more so.
Posted by Stienberg at 09:00