Elon Musk and the State of Sci Fi

Recently Elon Musk launched his Falcon Heavy maiden flight, making a successful launch of a very powerful rocket which can put upwards of 60 tons in orbit at need. This is an exciting day for fans of space exploration, and it has in all likelihood given us the best image of 2018, with the first payload being his Tesla Roadster orbiting the Earth. 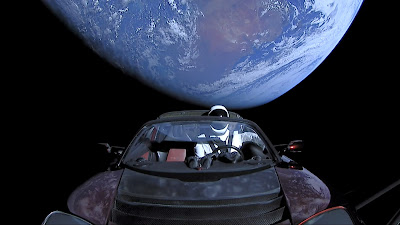 Now this raises some exciting prospects for future space exploration as a powerful new rocket is in place to bring payloads to the stars.

However, this news caused me to reflect on the state of space exploration and the state of science fiction in general. Back in 2004 Bush declared we would have a moon base by 2020, and there were excited discussions of using it as a stepping stone on a manned mission to Mars by 2030. Of course, since then, more practical issues have kept such dreams grounded. A great recession, an ever expanding war in the Middle East, the strategic pivot of the United States's military forces to the Pacific, ect. So it seems our dream of expansion off of our little blue marble are still born.

How does this effect sci-fi you ask? Simple. If our current prediction of a moon base by 2020 isn't feasible, how likely is it we can see a manned mission to Mars by 2030? The excellent film (and novel) The Martian posited a functional Mars base by 2035. How do our sci-fi timelines stack up in hindsight and even foresight if our own generation seems as earthbound as that of the 1950s?

Truthfully it seems that many of the optimistic musings on interstellar travel by 2100 seem naive now, and many a science fiction author seems himself sad to realize that their thoughts that the technology would advance quickly enough to provide some realism to their sci-fi are groundless.

Perhaps only the first book of The Expanse is correct and we will be limited to only our own solar system for the foreseeable future. Or perhaps, as some say, we will never leave our little blue rock because it lacks practicability.

I disagree with the naysayers personally, but I think that our long absence from the stars may have an influence on predictions of interstellar travel that was not so present in those starry eyed science fiction writers of the 1900s.

We can see some of that in the depictions of a battered overpopulated Earth depicted in The Expanse, or even Avatar and its story telling. Predictions of environmental catastrophe and overpopulation seem to haunt our otherwise hopeful depictions of the future. Rather than great vistas of alien worlds, we struggle amidst bleak hellscapes akin to Blade Runner and lament the dying Earth. Has a positive portrayal of the future lost its charm?

Whatever the case may be though, this proves that humanity is still reaching towards the stars, and we continue to have a practical, as well as literary, future in those heavens yet. Let us all look to the sky with wonder!
Posted by Stienberg at 10:02