Once again I'm coming back to the works of Matthew Quinn. He's got a new book for us, the second book in his The Long War series (as it is now titled) and a direct sequel to his first full length novel The Thing in the Woods which I reviewed back in 2017. Here now though, we are given the events of The Atlanta Incursion!
As a warning, some minor spoilers will follow from the events of Thing, but nothing that will spoil the whole plot! 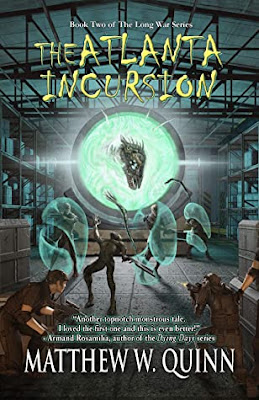 From goodreads.com
The story picks up roughly a year after the events of Thing and takes place in the Atlanta metro area in the aftermath of the Great Recession. There's plenty of abandoned areas, decrepid buildings, and gang activity to keep prying eyes away from things you'd rather not see. Unfortunately, that doesn't work out for young Javion, a member of the the Edgewood Jack Boys who, while out on a mission to bruise up a rival gang, finds that his simple turf war has suddenly taken on implications of an interstellar nature.

Meanwhile, young James Daly is doing what most kids his age are doing; managing his school life, studying for tests and attending classes, keeping his long distance relationship going and also staving off nightmares about confronting an eldritch horror in the woods last summer. Just simple freshman school worries. All through this he's trying to manage his friendship with his roomate Eli, and then with his girlfriend Amber, another survivor of those terrible events last May.

There's something strange going on in Atlanta though. Bizarre sightings, drones flying around, and perhaps Extra Terrestrials roaming the streets at night. James himself begins to see this, confused and worried, he thinks maybe he needs more sleep. However, it turns out that the events from last summer might not be as complete as he would like.

James was much how I remember him from the last book, but has had some definite character growth. Quinn also goes to show that he isn't unscathed from the horrible events he witnessed before, with nightmares, and some survivors guilt. I can say he captures this quite well from a narrative standpoint, and uses those feelings in both James and Amber to display character growth, vulnerability, and even some access to their inner badass when the time calls for it.
Amber is also well handled. I did criticize the last book for this character failing the Bechdel test, and her treatment has improved. She's far more her own person, not only thinking about her attraction to James and has her own inner demons which haunt her in the story. I do think there was better opportunity for her to have another female character to play off on, instead of just one conversation with her roomate. Overall though, her arc and agency in this story is well handled and I applaud Quinn for upping his game with her and her actions in the story. Near the end she does get a pretty amazing scene which alludes to her rural heritage and something about it is just oh so right!
Our two new characters, Javion and Eli, were much more enigmatic. Javion comes across as one hell of a hardass who progressively survives more and more punishment, becoming something of a badass. He was already someone who grew up tough on the streets of impoverished Atlanta, so his growth is handled nicely and does go some way to explaining his resiliency. I think he was deftly handled for a character who could have ended up as something of a stereotype, and in light of events going on which took place just before this story came out, his life experiences (and distrust of Atlanta PD) were both timeless and timely if that makes sense. I am looking forward to seeing more of him in the future. I will admit though that his third act was less impressive than I had hoped for.
The final new character, Eli, was a bit of a mystery to me. It's true he's not entirely new (I made sure of that) but he's name dropped only a few times in Thing so he felt new at least. He's James's roomate, has some trouble accepting the alienation James is experiencing as James (for obvious reasons) can't really talk it out with him. His Jewish background and life is fairly well explored, and his friendship with James is fleshed out more, but beyond that, I didn't really know what to make of him and his character, unlike the first three, feels almost incidental to the story rather than an integral piece of it.
That being said, there were many fun moments in this book. The shoutouts to popular culture, especially from the 80s, 90s and 2000s was fun for someone like me who grew up immersed in a similar nerdy culture. The many references to the X-Files or Men In Black made me grin. That those were something of a running monologue in Javion's head endeared him to me. The sort of low key cultural jabs at city living Eli and the rural Amber were a fun contrast between rural and urban culture (especially one reference to James 'going native' which also cracked me up) and having transitioned from a rural to urban lifestyle myself it was quite relevant.

I also enjoyed the 'secret war' aspect of the series. It makes sense for an X-Com style organization to be fighting aliens that aren't landing in big motherships. Though a lack of understanding of the alien goals, more speculation about why they did what they did, and a little bit of frustration with a paucity of prisoners did leave me in the dark to what precisely was going on. A small frustration was a moment where an alien speaks stunted English and then later we're informed the aliens never communicate back which felt...odd? I think I might have understood more if we'd seen or heard about the aliens taking other prisoners because it renders Javion's plot more sensible. That aside, it worked nicely for upping the stakes for the next installment, which I always appreciate.
The third act was quite well done, with very competent and exciting action scenes put forward, as I've come to expect from Mr. Quinn, and it had me on the edge of my seat for a bit (I finished the final third of the book in one sitting). I will admit that one aspect of the final fight made me skeptical, without spoilers, I didn't quite see the reason James got pulled into the fight in the way he did. It performed well and James still came off as a greenhorn, but the set up could have used a bit of tweaking in my opinion.
Overall, this book is great in that it manages the transition quite well in an Alien kind of way. By that I mean that where The Thing in the Woods was akin to the film Alien, what we see in The Atlanta Incursion is definitely a sequel in the Aliens vein of story telling. Fun and filled with equal parts dread and action.

A great read, I recommend it!
Posted by Stienberg at 08:00