The Thing In The Woods

With 2017 we have another delightful tale of horror from writer Matthew Quinn. I've been pleased to review some of his work on this blog before, and I can tell you with supreme confidence he is an excellent writer. His latest offering of terror comes to you from the South in Georgia. Get ready dear readers as we journey south, deep into the wilds, and confront the murderous cult that supports, The Thing In The Woods. 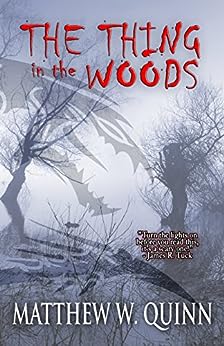 This story is set in 2010 in the fallout of the Great Recession which has raged across the globe, in the little town of Edington. The story is very much driven by that backdrop, driving the leader of the cult in his devotion to protect the town. Our main character is forced into the poorer section of town by the loss of his father's high paying job and into dire economic circumstances.

Thing explores the story from both a Lovecraftian perspective (the unknown horror in the Woods and its unfathomable goals) and the cultural perspective. The methods of the cult are by no means commendable (blood sacrifice to an eldritch horror) but the desires are. The cult seeks to protect Edington from outside interference, and of course, keep the horror from eating everything in the immediate area. However, perspectives on how good this is vary, even inside the cult.


Quinn handles his characters, regardless of age, quite well. He nails the generational divide in values, and ideas between the groups of characters. Their different values in entertainment even feature, leading to an amusing conversation about Casablanca on Blue ray early in the novel. However, the different ideas on entertainment from the different characters make for some lively individual character tics which flesh out the cast rather well as the story progresses.

Our main character James Daly brings the main viewpoint, propped up by some supporting characters like Amber Webb, and he is very much the urban everyman transplanted into a culture not his own. Often deriding the rural town of Edington, and referring to its inhabitants as rednecks (while calling the local countryside "Deliverance country" in a phrase that made me chuckle) showing off his more blue collar disdain for the community. Then of course, he is flung into a situation well beyond his understanding and control, forcing him to rely on his wits and more than a little of that redneck culture, to survive.

The characterization is the strong suit of the novel. There's no unnecessary ambiguity in characters, and their motivations, desires, fears, and great little individual character moments round out the cast and make then memorable even in passing. James's family, from his down on his luck dad, to his junior high sister, all seem like real three dimensional people, with great establishing shots. Even the human antagonist, Phillip Davidson, is an excellent character. Even though he's rather unambiguously evil by any moral standard, his desire to protect his community and his "congregation" make him at least somewhat relatable. His unambiguous lust for power though, definitely make him the villain. Sam Dixon is another excellent character, who brings another human face to the cult, and his redemption makes him a truly tragic character.

Unfortunately, one character who is lacking is the female lead, Amber, who fails the Bechdel test in her first appearance. She really serves as a love interest to keep a bit of a romance subplot going, and it felt like more of an impediment to the story overall. She required a bit more fleshing out compared to the other characters, but I didn't despise her.

The horror elements aren't quite as subtle, and rely more on the terrible knowledge that something is indeed in the woods, and indeed there is a cult out killing people. There's a definite tension in the story as the cult struggles to maintain its secret in the 21st century (and against the unknowable whims of a carnivorous eldritch horror) and James struggles to fight back against the cult and protect his family. As well as a little bit of light thriller as James works with a less than happy cult member in order to survive.

Where Quinn excels is his action. The action scenes stand out as fast paced, interesting, and entertaining. They read like something Stephen King might write, tightly plotted and engrossing in their detail, with the characters thoughts putting you in their heads as the scene plays out. It made the novel fast paced, even with the horror elements it worked nicely. It combines the creepy with the adrenaline and leads to some lovely car chases and some knock down fist fights, and even the horrible eating habits of the eponymous Thing.

Though there's not too much mystery where horror is concerned here, the disturbing nature of the monster, and its eating habits, make it scary. The characters have the appropriate dread when seeing it, but I think building more mystery might have served the story. However, it reads well, and is fast paced so any lacking of the traditional horror build up can be overlooked as we jump straight into the meat of the tale.

Overall, Thing is a fun, fast, and entertaining read. It covers some different ground compared to Mr. Quinn's other work, but this one reminds me most of Beast of the Bosporus, in a modern more Western setting. If you like horror I recommend it, and if you like action, you'll certainly be entertained as these well thought out characters duke it out.

Once again Mr. Quinn does not disappoint.
Posted by Stienberg at 23:14