As another part of the Great 2020 reread, I come to the second book in The Expanse series, Caliban's War. I originally read this roughly two months after I had read the first book, largely because it had taken me a surprisingly long time to make the time to read it. However, diving in I was not 100% sure what to expect with it, but again found myself pleasantly surprised.

If you miss the symbolism in this title I will be genuinely surprised! As a general warning, there will be major spoilers for Leviathan Wakes below. If you haven't read the first book in this series, drop everything you're doing and go read it! 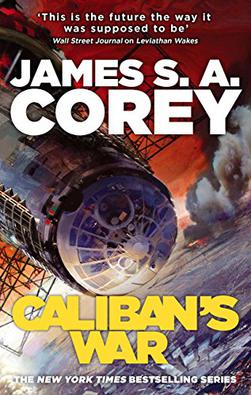 Picking up 18 months after the events of the original novel, humanity is struggling to cope with the realization they are not alone in the universe after the Eros Incident. Venus is a churning hive of alien activity doing god knows what, while the fragile coalition between the governments of Earth and Mars has shattered from a cold war into a semi warm war which threatens to engulf the Solar System in flames once more.

Enter Gunnery Sergeant Roberta "Bobbie" Draper of the Martian Marine Corps, 2nd Marine Expeditionary Force. She and her squad are on patrol on Ganymede, the breadbasket of the Outer Planets and one of the safest moons in the Jovian System. Suddenly the find themselves rushed by their UN counterparts, only to discover both sides are under attack by some kind of horrible monster. Her communications jammed, she has no way to signal the orbiting fleets that there has been no kind of attack and hostilities commence unleashing absolute hell on Ganymede.

Praxidike Meng, a scientist on Ganymede, finds that in the chaos someone has taken his daughter. Desperate to find out what has happened to her as the warfare and collapse of civilized society on his home moon threatens to engulf him, he has no choice but to turn to the one man who may be able to help him, but this man has started wars with his honesty before.

Watching all of this is Deputy Undersecretary of the United Nations Chrisjen Avasarala, a capable take no crap politician in the byzantine factionalism of the United Nations Secretariat which governs Earth and its colonies in the Solar System. As she's watched the familiar pattern of Earth-Mars-Belt relations has crumbled. Now she has to deal with a resurgent OPA, an Earth-Mars Cold War threatening to go hot, and above all, the alien life forms on Venus. In her attempt to keep a lid on things, she finds herself drawn into political schemes beyond her wildest dreams.

Finally, the crew of the rogue gunship Rocinante are back! Their captain, James Holden, has been playing policeman for the OPA for over a year and followed the orders of Frederick Johnson, but he yearns for more work, for something beyond the gun for hire role. He might get his chance as a humanitarian disaster, a missing girl and a mean politician cajole him into another solar mystery.

Aside from the first installment, this book is probably one of my favorites in the whole Expanse series. I have reread it, or even sections of it, three times now. It introduces two of the strongest female characters in the series, and manages to ratchet up the tension just as brilliantly as the first book did as each chapter progresses. From fighting monsters and disbelieving superiors, to watching the slow collapse of the artificial ecosystem that is the moon of Ganymede, we are treated to the horrors of war, human greed, and tribalism.

The novel goes to decent lengths to outline why humanity, poised with the greatest and possibly most existential threat to its existence, would rather fight itself than deal with the problem at hand. Shadowy and short sighted forces would rather re-fight old wars than bring about lasting change in the Solar System. This leads to many bad decisions, and many bad actors trying to profit from human misery on an interplanetary scale.

Despite not being explicitly a war story, it goes to not inconsiderable lengths to look at what war can do to people and communities. The fighting on Ganymede causes widespread destruction and even brings out the worst in many people. For all that, it handles scenes of space combat superbly and displays some of the best short ship to ship battle sequences I've read. The first fights to the later big fleet actions flow beautifully across the pages and I was quite pleased with the way they played out.

Growth in our characters and their interactions are wonderful. The relationship forged between Bobbie and Avasarala, and eventually Bobbie and the crew of the Rocinante are wonderful to watch. I enjoyed their dynamics and the clever plot which got the ball rolling, and the execution of the finale was spectacular.

A well done sequel in a well done science fiction series. Definitely pick it up!
Posted by Stienberg at 12:01