I'm sadly a little late to the party proclaiming the awesome which is this book, but rest assured, it is wonderful to be reading a work that Robert Jordan wrote so long ago and I would say it is amazing that we are able to get our hands on it. How does a dead author publish a new book you ask? Simple! His loving wife and editor releases a novel he wrote which got tragically overlooked way back when!

This novel is Warrior of the Altaii! 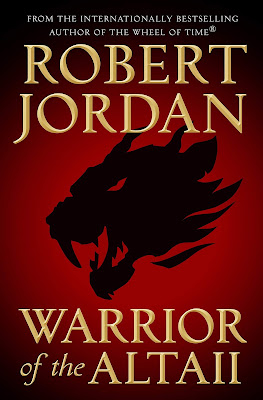 Set in an unnamed fantasy world, we follow the story of Wulfgar, a lord of the Altaii people, who are by and large the masters of the Plains. They live a hard life, hunting, raiding and running slaves across the plains to the various trade cities. The most powerful of those is Lanta, a land of trade and slaves where the Altaii people often come to perform commerce. However, there is a plot now developing among the rulers of Lanta and a rival people of the Plains, the Morassa, and it is a plot aimed at destroying the Altaii.

Wulfgar must now trust a strange Wanderer, a woman from another world, and his Sister of Wisdom and her magics in order to try and save his people. But they are opposed by powerful magics themselves and even worse, the interference of the strange Most High who are like gods. Will he be able to save his people? Or will they be laid low by the machinations of their enemies?

Written in the first person, it follows the story of Wulfgar and tells it through his, and by extension, the culture of the Altaii's eyes. His people are mismash of Mongols, the Great Plains peoples of the Americas and the mounted hordes who terrorized the Roman Empire like the Huns. This makes for a very alien and sometimes unsettling culture. It is a wonderfully unique story to follow, and it has fun visuals and really shows how Robert Jordan was emerging as an author.

The story wears its love of history and fantasy (in particular, Conan the Barbarian) on its sleeve. There are numerous fascinating parallels to our own world, many strange plot elements and creatures, and even deep disturbing dungeons in which our hero must face his fears.

Now, I really don't want to say much to spoil the story for you, but I can say it is a fun and light read. At only 98,000 words you can breeze through it. Some pieces in it have not aged particularly well though, with some characterizations feeling a little cringey (particularly the different plots of the Queens of Lanta) and the very secondary nature of the female characters was sometimes a little eyebrow raising. Our aforementioned Wanderer gets little agency and could probably be replaced with a stuffed teddy bear and the story would change very little. The range of slavery, pillaging and executions may not run well with modern audiences either. However, overall you can really see how Jordan built his writing style from this, and he did an amazing job creating a rich setting where he could play out this drama of the people of the Plains versus the people of the cities.

What is perhaps the most fascinating thing about this novel though, is how one can recognize the bones of the Wheel of Time series in this single story.

Throughout, one can find numerous scattered echoes of what would become the setting for the Wheel of Time. The Altaii are pretty obvious inspiration for the Aiel from that series, with the harsh honor code, rough warrior lifestyle and their respect for men and women's laws - each distinct and separate from one another - which define daily life.

In the Sisters of Wisdom you have a template for the Aei Sedai, as they are women and only women may do magic. Men are not allowed, nor really capable, of doing so. The Most High, at a stretch, might be assumed to be stand ins for the Asha'man, but that is not incredibly likely. One big later plot point though, seems very much like the prototype for the all important ta'veren story element from the Wheel of Time, and it was kind of amazing to read.

The Backbone of the World, a great mountain chain separating the East from the West and the Spine of the World in the Wheel of Time are very similar, while the Plains and the Aiel Waste, serving the same function as toughening up the Plains people.

There are no one on one swaps for characters, and the story is its own unique piece of writing, very different from the later third person and multi character epic Wheel of Time would be.

However, what really drives my love of this piece is using it almost as a history book. Sifting through it I see the early forms of Jordan's writing and get some insight into how he began to weave the elements together which would end up forming the Wheel of Time. As a piece of research or wonderful way of examining the story telling in his world it is second to none. On its own it is enjoyable, but the extra layer of wonder for us fans of his magnum opus is just beneath the surface where we can see ideas and inspiration bubbling up which would drive some of the plot for the later work.

Definitely a worthwhile read for fans of the Wheel of Time and anyone who appreciates both modern and old fantasy at its finest!
Posted by Stienberg at 14:57