Set in feudal Japan in the sengoku jidai period, Kagemusha follows the story of the Takeda clan as they battle with the fearsome warlords Tokugawa Ieyasu and Oda Nobunaga. It is a story revolving around the historical drama leading to the end of that particular struggle. Those familiar with history will know how it ends from the start. For those without knowledge of it, I will refrain from any spoilers of the ending.

The story is a jidaigeki film (literally period drama) directed by acclaimed Japanese film director Akira Kurosawa of Seven Samurai fame. It won the Palme d'Or at the 1980 Cannes film festival, and was nominated for other awards. 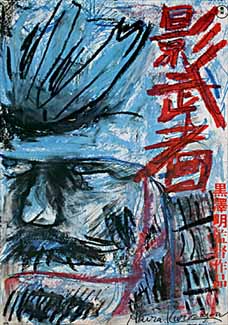 Our story here opens with the daimyo of the Takeda clan, Takeda Shingen, and his brother, Takeda Nobukado, looking at a condemned criminal who bears an uncanny resemblance to the daimyo. It is decided, that despite his insolent nature, they will keep the criminal alive to act as the daimyo's body double in time of need. He becomes, the kagemusha. Meanwhile, the Takeda are engaged in a battle with Tokugawa Ieyasu, one of Nobunaga's prime supporters. Shingen, feeling that the fall of the castle is imminent, travels to oversee the siege. While watching the siege one night he is shot and mortally wounded by a sniper.

Despite being on the cusp of victory, Shingen orders a withdrawal of his forces. Nobukado is able to maintain the ruse by posing as his brother, but realizes this is a failing strategy. Shingen gathers his closest generals and allies, including his son Katsuyori, and orders that if he dies, the clan cannot be allowed to fall to the plans of their enemies. He orders that they must stay neutral for three years in order to recuperate. Dying from his wounds, Nobukado orders the thief to be used as a body double to fool the clans enemies. Meanwhile, his foes ponder on what this sudden change of strategy in the Takeda clan means.

This deception will not be easy. The thief is uncouth, ill educated, and does not know the ways of the noble families. He will have to fool Shingen's allies and family, as well as dealing with the bitterness of Katsuyori, as he fumes at being unable to take his rightful place at the head of the clan. His enemies too are on the lookout for anything that undermines the clans position.

At its heart, Kageshuma is a family drama. It revolves almost solely around the issues affecting the Takeda clan, the internal family, and its struggle to survive. Nobukado tries to keep the wishes of his brother in place while protecting the clan, while Katsuyori is struggling to understand his role in his father's plan, all the while feeling as though he has been slighted through his fathers death and delayed inheritance. The thief himself must navigate the world of concubines while preventing the old lord's son from discovering he is an impostor.

The film itself is a visual spectacle though. Medieval Japan is brought to life in costuming, scenery, and battle through the use of well dressed extras, amazing costumes, and fascinating battle scenes. The work has clearly been done in bringing this era of history to life, and you see that in the little scenes where men are relaxing, and the scenes where soldiers clash on screen.

The small actions of the actors might be baffling to those unfamiliar with Japanese dramas, but the way they use subtle facial expressions and motions to portray events are amazing in my opinion. If you're even remotely familiar with Japanese culture you will get a pure joy from seeing how the movie turns out.

However, if you aren't familiar with Japanese drama, history, and culture, this may be a difficult movie for you. If you don't like movies with subtitles, that is doubly so.

Personally, knowing the history, I enjoyed the film and what it has to offer. As a historical drama it is excellent, and I think it should be applauded for how well it captures the era. The work that has gone into the costumes, the set design, and the appreciation for the culture is amazing. It is worthy of any awards it was nominated for. The film was spectacular.

All in all, this is an excellent historical piece. I recommend giving it a watch even once to truly appreciate some of the fantastic imagery we owe Japan, and to get an understanding of Japanese culture.
Posted by Stienberg at 20:44