The Wealth Gap and redefining Monopoly

The Video Shown Here which I reccomend people who read this short blurb watch, really illustrates the staggering wealth gap in American society, and I shudder to think how this would be applied in my own country on the same graph. Though for anyone interested a page here shows the distribution in Canada and a direct comparison to the US. Now for someone like me who has researched this issue it is not what I would call a huge surprise. However, what shocks me is the difference between how people seem to percieve the weatlh gap (which is still pretty unequal by our own collective admission apparently) to how different it actually is!

For those of you having seen the video it truly is staggering just how wrong the common perception seems to be.

Though what shocked me though is something that I suppose in hindsight ought not to have shocked me was this little nugget. 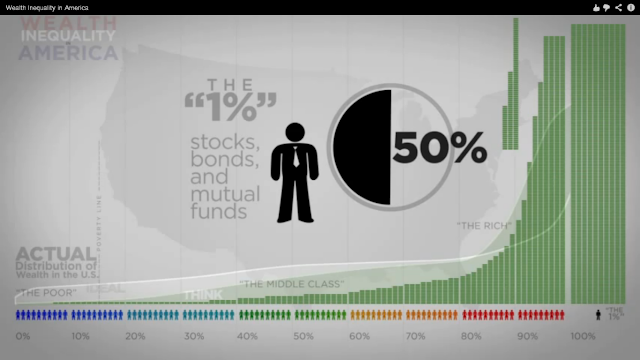 Yes according to this chart the top 1% of the nation owns fifty percent of stocks, bonds and mutual funds.

The idea of them owning more of the nations wealth than the other 80% is not surprising, even the idea of the top 1% owning 40% of the nations wealth didn't really shock me to learn. However, the knowledge that they own 50% (I'll say roughly for fairness sake) of the stock, bonds, and mutual funds is simply a staggering thing to learn. Think about that for a second, that means that only 1% of the country has a virtual monopoly on the stock market and control over its resources.

How that speaks to the way the market works, its faults, and where investment goes and how this invisible wealth is generated and spent I'll leave the reader to speculate on.

The fact remains however, that this gap in wealth, control of the market and industry, and depressingly, who gets their voice known in government (money speaks) shows just how much power, real tangible power, one group in society controls.

It is worth noting this and I would urge readers to really think about what this means for our economic and political system across the world.
Posted by Stienberg at 20:38