The Grim Dark (In Writing)

Recently dear readers something has been on my mind which I just can't shake. Something that has both bothered and annoyed me. It's something which has been slowly creeping into our papers, our video games, our movies, and our novels! This slow seeping and gloomy menace is what we can call Grimdark (or Grim Dark). Now this is a phenominon which is not entirely new, it has been going on since the 90s after all, and is one which is fairly well established. In the fantasy genre though, it is beginning to show. Since A Song of Ice and Fire and its attendent TV series Game of Thrones became such sensational hits, we have been seeing an upsurge in popularizing dark fantasy. Dark fantasy has also been around for some time (Diablo anyone?) and has had a genre of its own. However, it is one which is becoming incredibly popularized in all forms of fantasy writing recently, pushing it to mainstream. This of course has shifted me from being mildly opposed to it, to becoming outright annoyed.

Now here's the thing, I don't mind dark fantasy (or any dark item in particular) but the massive push of depressing black, bleak, and nihilistic fiction is starting to become almost cliche to me. I enjoy a good morally gray story from time to time yes, but recently its less from time to time, and more 'all the damn time'.

To use one great example we have George R. R. Martin's A Song of Ice and Fire series. A deconstruction of the heroic fantasy genre (which is wonderful in itself) it started as a rich and interesting world with some dark and morally gray tones, but has since shifted to bleak, hopeless, and has multiple characters carrying the idiot ball. For instance in the most recent book A Dance with Dragons we had a series of inreasingly dark, twisted, and disturbing scenes played out before us and everything that the main characters did seemed to serve no purpose or else went incredibly wrong. Now I hadn't minded this before, but by this point many of the actions the characters took cried out idiot ball rather than 'decision gone wrong' and many of the more grotesque elements of the story were completely uncessecary.

Here's the thing, I love Martin's work and all he does in it, but when the series is so dark that I can instantly predict how badly something is going to go wrong without even thinking about it there is something wrong. I found myself simply guessing who would be the one to be screwed over in the next chapter, and was never really surprised at who it was.

For some non-literature examples I merely need point to video-games like The Witcher or the Dragon Age series. Each of them are good games, but the unnecessary ammount of angst, grimness, and depressing overtones makes it irritating for me to keep playing them. And the modern swearing (I mean honestly, like in all this dark literature everyone has to say f*ck at some point or another! There was no point in history until very recently that f*ck was being used as a swear word! I just can't stand that writers need to use it to somehow make the setting 'darker and edgier'! That word doesn't make it darker or edgier!!!) in these series just sets my teeth on edge. The games tell a dark, racist, and depressing story about a fantasy world where fantastic racism abounds and even kings and nobles aren't safe from the machinations of evil and inherent corrupt decay. They also seem quite content to play in petty power struggles as the powers of hell stand almost literally on their doorstep. Grimdark indeed.

The deonsrtuction of the heroic fantasy genre is something that I can appreciate from an artistic perspective, but when we are flooded by so many cheap grimdark fantasy knock offs that have no depth I begin to get sincerely tired of the whole charade. Why should I care that there are so many rape scenes, or that in this version it's just so morally gray? Unless the author is setting out with a specific goal in mind I really can't stand the cheap novelty of it.

A recent series that set off my irritation was the Prince of Thorns series which is loosely set in a post-global warming earth, but has so many elements of grimdark (the cover art alone should tell you). 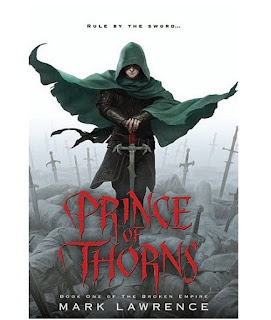 Now while I have nothing against the authors writing, he just latches to hard onto this grimdark aspect for me to be able to truly enjoy the read (indeed the opening scene is a group of swearing soldiers happily ransacking some dead peasants bodies and describing all the blood and gore) which is a let down. If it even had a slightly lighter tone I would be more sympathetic, but sadly now I cannot be.

The biggest problem is when these stories get so dark its to the point of self-parody. Dance with Dragons comes oh so very close to this. Every chapter with the Martell prince was painful to read with all the grimdark I was experiencing. It nearly got as bad as a Warhammer 40k novel (and those are grimdark by design, but thankfully not all take themselves seriously). Hopefully though future installments will leave me guessing at the plot again and finding it a page turner rather than glumly turning from one page to the next as everyone screws up in one fantastic way or another.

Now with this out of my system I can return to writing my own, somewhat light hearted, science fiction.
Posted by Stienberg at 14:49

Email ThisBlogThis!Share to TwitterShare to FacebookShare to Pinterest
Labels: A Song of Ice and Fire, Authors, Opinion, Writing