What happens when you combine the Cthullu mythos with Scooby Doo? You get a ragtag group of 70s kids growing up and returning home to fight horror on a spooky island! Here now is a prime example of some quirky and almost out to lunch Meddling Kids! 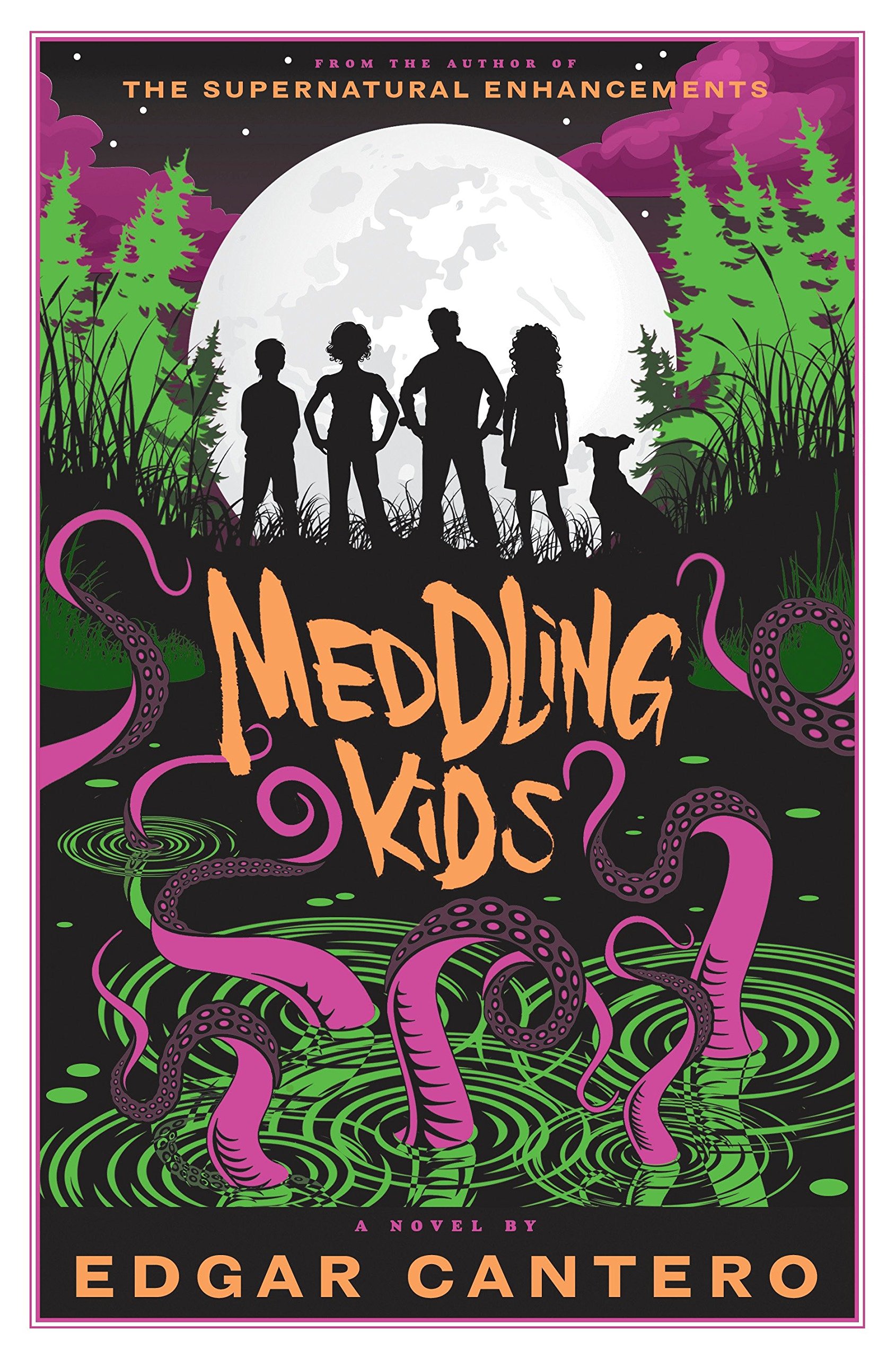 Written by Edgar Cantero in 2017 it tells the tale of the Blyton Summer Detective Gang (and their dog Sean) who solved the mystery of the Sleepy Lake Monster in 1977. Picking up thirteen years later, the gang is getting back together because their lives have, since that summer, fallen to pieces. The kids, Peter Manner, Kerri Hollis, Andrea "Andy" Rodriguez and Nate Rogers have aged. In 1990 they find themselves oddly drawn back to Sleepy Lake and the Deboen Mansion where they almost got caught by the machinations of a treasure hunter Thomas Wickley. In the end, he proved to be a goon in monster costume, but the night they caught him, they found themselves facing more than just a man in a mask.

Kerri is now an underachieving alcoholic, Andy is an Air Force drop out, Nate has checked himself into the mental ward and Peter has checked out of life thanks to a drug overdose. The original dog, Sean, has also passed on, leaving his legacy to his grandpup Tim. Has their old nemesis come back to haunt them? Or is something more sinister afoot at Sleep Lake in the Blyton Hills...


The story, pitched as "The Scooby Gang meets Lovecraft" delivers on exactly that, only with the Scooby Gang all grown up and in their troubled twenties. The influences and homage to the original gang and their dog are sprinkled throughout the book, with the Zoinx River being a nice homage to one totally-not-a-stoner's catch phrase. Though it settles on Lovecraft Lite rather than the pure existential horror of the original works, it captures the spirit quite nicely, and even tries to throw in some scientific reasoning beyond just magic for the existence of some of these monsters. That said, Arkham and the Necronomicon feature heavily in the story!

"Andy" the aggressive tomboy is the one leading the charge now to get the gang back together, and she is the driving force in the plot. Getting the investigation off the ground she manages to break the surviving members of the club out of various funks and even starts to go all gung ho on the strangeness itself. Pushing herself along, her sheer force of personality starts to pull things together. Though the group's former leader Peter hasn't quite given up the ghost yet! Kerri brings the Scully to the story, insisting on a rational explanation for everything while also managing to, more or less, cope with the craziness of their situation. Nate brings the slightly unhinged view to things, believing in magic, hallucinating and running interference between the two leading gals. Cantero captures these diverse personalities extremely well and we see him putting a great cast together. He flows seamlessly from narrator to narrator (even good old Tim) and manages to keep his cast, man and animal, interesting to view the world through. Dog lovers will get a fond reaction for Tim, the gangs ferociously loyal Weimarener who is both adorable and a quite clever member of the team in his own right.

The supporting cast is well put together. The former bully Joey Krantz plays a surprising roll in the novel. The gang finds that their childhood adult friends have either moved up or down in the world. Their partner Air Force Captain (retired) Al Ulrich is still around and can hook them up with all sorts of adult toys which will come in handy, while another former childhood nemesis Deputy Copperseed is the new sheriff in town and may or may not be willing to help them settle the mystery once and for all.

Combining the campy nature of Saturday morning cartoons with the darkness and death of Lovecraft's universe, with a spice of B-Movie action for variety, the book does a good job misleading your expectations from start to finish. I eagerly devoured it over the course of a few nights. That being said, I never really found it scary vs. flashy and fun. The welding of different ideas came off almost flawlessly, with maybe one or two scenes where it was a tad too much.

Narratively the book flows well. The action scenes can occasionally feel a little clunky as Cantero can designate POV's without good build up and sometimes in describing who a character is fighting gets lost in the rush of action. However, the kooky wordplay and anthropomorphizing of objects makes for some hilarious dialogue on occasion. We sometimes go from strict narrative to script style talking points with characters speaking like this
(Stepping away from the writing STIENBERG directly engages the READER)
STIENBERG: As though we were talking from the pages of a play or screenplay.
READER: Don't you find that a little clunky?
STIENBERG: Not really as it is an interesting time saver in dialogue and does break up repetition while keeping the reader engaged in what is being said. It's an interesting idea to say the least.
READER: Maybe that isn't everyone's favorite thing.
STIENBERG: Well I enjoyed it, and it broke up action scenes quite well too.
(STIENBERG returns to his keyboard while the READER is left examining the voices in their head)
and feeling like we are getting a glimpse into what might be the novel equivalent of a B-Movie plot, though arguably this could be just as wonderful as an A list action movie.

Now it is against my nature to spoil mysteries, but I'll just say that you'll find some wonderful twists in Lovecraft and numerous shout outs to his stories in here. I'm told there's shout outs to Nancy Drew and the Hardy Boys, and I did pick up on some, but I was laser sighted on the horror aspects, so many of my direct laughs or AHA moments came from seeing these little love letters to horror included.

Climaxing in the most spectacular way possible the book doesn't let you down and I literally couldn't put it down the for the last hundred pages. It's a fun and action packed read that those who have read Lovecraft, grew up with Scooby Doo or Nancy Drew and the Hardy Boys will not want to miss this October!
Posted by Stienberg at 13:22