Three months ago I mentioned my excitement at seeing the long awaited, if somewhat surprising, sequel to the The Handmaid's Tale. When The Testaments dropped on September 10th in my city I was quick to pick a copy up. Sadly, I was not as quick to read it as I was working through my existing reading list at the time and didn't believe rushing things would bring me any benefit. However, I was finally able to get back in to the world Atwood crafted in 1985. 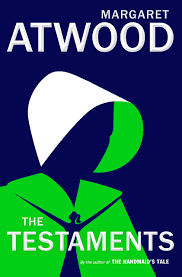 I will admit, I was a little trepidatious at first. I generally am not a fan of sequels published long after the fact, and see them as usually being far inferior to their progenitors. However, I was lucky enough to see an interview with Margaret Atwood hosted live from London at a local theater. In it, I heard  some excerpts read from the book, and an altogether too brief talk with the author about her work and her decisions for writing it after so many years.

Naturally of course, many of them had to do with the current politics in the United States, but they were also influenced by the advent of the Me Too movement, and campaigns for women's rights the world over. It was also because the Handmaid has become a surprisingly popular and effective method of protest. Showing up at pro-Choice rallies, and standing as a silent testament to the suffering women will endure when the rights to their bodies are taken away by men. In that case, how could she not write a sequel to explore more of the world of Gilead?

From The Mary Sue

The Testaments is very different from the original. The original, which told the story through one narrator's view which often included hazy recollections, is now told through three distinct perspectives. They are alternatively called: The Ardua Hall Holograph, Witness 369A and Witness 369B. Each has their own names, but as with the case of identity in much of Atwood's work, those prove to be fluid and I won't spoil anything by using the various identities and pseudonyms characters operate under, save one.

Using three different perspectives to tell the story set in Gilead is, in my opinion, genius. Though only one of the narrators is an adult, all three convey a different set of ideas, cultural upbringings and motivations. Each is quite understandable, sympathetic, and ultimately engaging in keeping you interested in the outcome of these in-universe historical documents.

The one character whose name I will reveal, is that the Ardua Hall Holograph is one of the villains from the first book, the erstwhile leader of the Aunts, the women who control other women in Gilead, Aunt Lydia. Hers is a shocking story, one which shows an amazing insight into what creates an authoritarian regime, what one must do to survive in one, and how one can be brought down. In doing this Atwood effectively wields empathy like a cudgel, as no doubt those who had read the original book or watched the television series felt they could never like or sympathize with a woman who engaged in the wholesale abuse of other women. The story of Aunt Lydia shows this not to be true.

It is a fascinating tale of how indoctrination and reshaping a narrative is used to control and coerce subject populations in authoritarian regimes. We see the start of Gilead, and a great deal of the brutality used to begin the control of women as seen in The Handmaid's Tale. What is fascinating is that, other than the specific roles of Aunts, Handmaid's, Wives, ect, Atwood has drawn almost entirely on real historical precedent for how awful regimes are established and keep power.

As a small aside, this can almost be seen as a snub against those who insist "it can't happen here" or that the United States is somehow immune to the power of authoritarian instigators. Indeed, such an idea has been snubbed as far back as the 1930s in a very literal way. A good message to take from this book, and its predecessors then, are that our democratic rights must be guarded very carefully. Hence the powerful, silent symbolism of the Handmaid.

Returning to the novel, we actually get a better look at this world without the blinders that Offred had to operate under in the original. Gilead, does indeed not constitute the whole of the United States of America. The West Coast, Texas, and an unidentified amount of the Southern US operates free from the influence of Gilead, and its control in northern New England (Vermont and Maine) seems shaky at best.

Canada remains free, but on ever tense terms with Gilead, which is still larger and more ruthless than its northern neighbor. One particular sticking point between these two nations is that of the fate of Baby Nicole. The young baby was spirited away by her Handmaid mother at some point before the events of the novel, and she has become the poster child of Gilead's foreign policy. Canadians say her name with reverence as a symbol of resistance to the theocracy in Gilead. The people of Gilead meanwhile hold her up as a symbol of the duplicity and heathen nature of Canada. The Underground Railroad and the resistance organization Mayday still operate from Canada, though very discretely.

All this plays an important role in our story, as one of the protagonists is even Canadian! It gives us a very useful outsiders view of Gilead, and allows us to see it through the eyes of someone not quite so constrained by its rigid social norms. Not that this is necessarily a good thing.

It also follows the story of children in Gilead, something emphasized, but not really present, in the original book. It's an interesting exploration of the everyday life of someone in the higher ups of the nation. It also shows how dangerous it is to be a girl of any age in this society.

This is all backed up through a great cast of supporting characters. From other Aunts, children at the schools in Gilead, and members of the resistance, we get a well rounded cast. One particular supporting character was quite tragic, and it tugged at my heart strings seeing her particular fate. They range from the sympathetic to the outright villainous. I was quite pleased by the work put into them.

The story here is one which sets out to examine life in this kind of dictatorship. It does this flawlessly I think. The dangers faced by women and children in a world absolutely dominated by men is fantastic. The small, but subtle, ways they can wield power and influence are looked at in depth. How clever these women are, and their bravery, cannot be praised enough.

The writing is very different from the original novel. Less prone to flights of romantic description or allegory that Atwood is known for. It is far more serviceable and to the point, making for a tighter narrative and fast flowing plot. This is, I think, to the novel's great credit and anyone who may have been turned off by the prose of the original will probably find this book much more approachable.

Some may be wondering, what of the original protagonist, Offred? What has become of her? Well, for starters let me say that this is not Offred's story. While she has one or two references in the novel, whether she is involved at all is at present a highly contentious debate among readers. Though the novel's tag line does say we learn of her fate, this is not exactly true as it is not spelled out in the story itself. This may frustrate some readers hoping for a direct sequel, but this is far more powerful in my opinion. This will probably cause some sincere contention for quite a while, so I will not lay any comments on it here.

The Testaments is a story of our times. It presents a shockingly honest vision of dictatorship, how it comes about and why people collaborate within it. Atwood did her research, talking with people from East Germany, former resistance members, and taking a good look at the world around her for inspiration. With a simple and cutting prose, she tells a vivid story which is very compelling in our modern times. I cannot recommend this book enough to people who want both a good sequel and a fantastic read.
Posted by Stienberg at 12:00