In something I predicted personally a while ago, but can't help but chuckle at now (I have a dark sense of humor sometimes ok?), Uber has suspended its self driving car program after a pedestrian was killed by a car in Arizona. It seems the woman was jaywalking when she was struck, which may explain why there was no warning when she was hit. Needless to say, jaywalking is a problem for human drivers, much less for an automaton in its infancy. 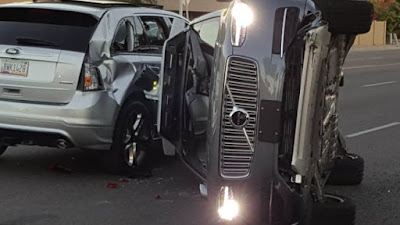 Now personally, I think self-driving cars are the future, to such an extent that the personal ownership of cars may be an oddity for our children and descendants. However, I do not think the future is now. The technology is fairly new and in its infancy. There are many new steps and tests that must be taken before it can be said that these vehicles are reliably safe, what with many previous accidents having been in the news. This, in my opinion, means that it will be a few more years before this technology is used on the larger scale, and well into the future before we see self driving cars as a day to day reality.

However, imagine in the future, not owning a car but being able to access one whenever you need it. You sit at home, but need to go somewhere and so call not a cab, but a car company who send a car from a garage which picks you up and can either stay with you at your destination or return to a garage only to come fetch you again later.

Imagine if you will then, not having the need to own a car personally but subscribing to a company which will send you one when you call. Parking garages might be temporary hangers for streams of vehicles that are simply waiting between calls to shuttle people back and forth to destinations as needed. This has the potential to unclog the roads as street parking might be a thing of the past, driveways and big garage additions might not be a factor in planning new houses.

This might cut down on cars on the road, and if these are electric cars in the future they might not even need gas stations as electric cars don't need to run as far. Personal vehicle ownership might then only be a thing for those who live in the country, and even then why might some towns not have these great garages to curry to self driving cars that their denizens might like but not personally need.

I can think of a few advantages, but even a few disadvantages. Cutting down on personal car ownership might be a net positive, but it could also limit the mobility some currently enjoy otherwise. If they still run on fossil fuels, and not be a positive for the environment, and these "holding garages" might be nightmares when it comes to urban planning on how to locate them or where they could be best placed to help cities grow. Hell, the skill of driving might eventually fade from the general urban populace!

All of this of course is idle speculation on how the future might work out. Currently though, I think its clear these technologies are in their infancy and have some ways to go. They will be the future I think, and how they change the future will be interesting to see.
Posted by Stienberg at 07:29