David Weber, as many may know, is well known in military science fiction circles as perhaps the preeminent science fiction writer of the 1990s and early 2000s. His works include the standard setting Honor Harrington series, and numerous stand alones such as Out of the Dark and The Apocalypse Troll while also writing numerous series of his own.

In the early 2000s he began work on his Safehold series, which promised to move away from Weber's usual fare of starships and space opera to the more nautical and landlubber area of wooden ships and iron men. Here he began what promised to be an exciting foray into a new world of cannon, swords and muskets. I, having only just finished book 10 of the Honor Harrington series at that point, eagerly dove in to see what he might have to offer in a field I was sure he would know much about.

The question is then, do we find boundless adventure and excitement Off Armageddon Reef? 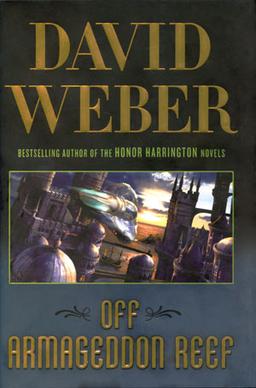 The framing device is set some 400 years in the future as humanity has a rather unpleasant first contact with a genocidal alien species known as the Gbaba. They push humanity to the brink of extinction only for a last, desperate operation to be undertaken to hide humanity from the aliens and eventually allow us to fight back. Operation Ark takes a colonization fleet well into deep space, hopefully beyond the Gbaba's reach, There, on a world known as Safehold humanity is to establish a low tech refuge to stay out of the way so we can rebuild. Unfortunately, the command crew have other plans and brainwash humanity into believing they are gods and set up a global church to enforce a technology bad mindset amongst the colonists. Some members of the crew disagree, but they get bombed into oblivion.

However, an ace in the hole exists. A cybernetic avatar of a long dead naval officer, Lt. Commander Nimue Alban, who is charged with leading humanity out of its technical stagnation and into a modern future.

To do that, she must adopt a new identity as the mysterious warrior monk (or seijin as the Safeholdians call it) Merlin, and find a people willing to listen to what she/he has to say. He finds that in the mercantile nation of Charis, which is even now facing down a coalition of enemies bent on her destruction, egged on by the all powerful Church of God Awaiting.

The story is essentially one of progress in the face of adversity, with some light spy and political thriller intermixed with one great back to work montage of the nation of Charis preparing to defend itself from an inevitable attack by hostile neighbors. Merlin begins introducing some innovations that will give Charis an edge in the coming war, and helps Charis by pointing out all those pesky foreign agents who could report on the innovations that are going on.

He even saves the Crown Prince Cayleb from assassination. This of course ingratiates him with the royal family, and gives him a bit of a reputation.

Overall the story follows Merlin and his allies, Prince Cayleb, King Haarahld, and various hangers on in Charis, as they work to apply Merlin's innovations to strengthen their navy. In the background you have the bad guys plotting, Prince Hektor of Corisande, Prince Nahrmahn of Emerald, and the ominous Group of Four at the Temple in Zion who pull the strings from behind the scenes.

Now you may have immediately noticed something that either turns off or annoys people about this series. The names are incredibly difficult to follow, and the naming conventions are a touch nonsensical. If you can stomach/tune it out you can probably remember the characters very quick.

Problematically, unlike Weber's helm character Honor Harrington, none of the characters here are particularly memorable.

The greatest major problem which dogs this book, and indeed this series, is the lack of tension. Merlin has access to technology that, compared to the local tech, is fundamentally magic. The problem then is that the bad guys have no counter to it, and functionally Merlin knows all and sees all, making any plans the bad guys cook up essentially moot. You know exactly how these events are going to end.

That being said, what does this book have going for it?

Well if you're a gearhead who loves technology and analysis of particular weapons and their effectiveness, you'll seriously enjoy this. Weber has an in depth knowledge of particular technologies and how they work, alongside their applications in warfare. Whether it's galley warfare or the advancement of gunpowder, Weber knows his stuff and displays it well, making sections educational and interesting. Personally I learned more about early sailing ships in this book than I ever thought I might learn in a science fiction novel.

The action scenes, as Weber is wont to do, are excellent. They are - while perhaps not as visceral as Joe Abercombie's - intense and action packed. You can feel the pummeling effect cannons have, and can be sucked in to the maelstrom of battle with the gunsmoke and the screams. He describes action and tactical situations well, which anyone who likes a good action scene can appreciate.

Following along the story of the conflict and how it leads up and breaks out is entertaining for a student of history. Much of the story can be followed logically, and you can see how the dominoes fall and appreciate all the political/espionage that leads up to the explosive climax that caps off the book.

As the first book in the series, it is a good installment. I'll let my opinion on the rest of the series be known at a later date, but for now let me say this. Off Armageddon Reef is an interesting and exciting opener to an epic science fiction series. You might enjoy it, or you might not. If you're looking for a thoughtful character driven piece examining religion and conflict, well you should look elsewhere. However, if you really enjoy military science fiction with detailed analysis of weapons and tactics, this is a book for you!
Posted by Stienberg at 01:30