The German Spring Offensive and "Victory"

100 years ago this month, the Germans began a series of offensives designed to, if not drive the Entente to defeat, drive them to the negotiating table. The German Spring Offensive (the Kaiserschlacht) or more generally, Operation Michael, the brain child of German Quartermaster General Erich Ludendorff. This was all to take place with 190 Divisions, three million men, and reinforcements, drawn from the German victory on the Eastern Front. It was the hope that this offensive would drive a wedge between the British and French armies, forcing the British to protect the Channel Ports, and push the French back into Paris so the German Army could deliver a coup-de-main and drive the Entente from the war before American manpower could be decisive.

The first phase, Operation Michael, was designed to drive the a wedge between the French and British armies, and force the British back towards the Channel Ports. Follow up operations (initially termed Operation Georg) would then turn north to deliver a decisive blow to the British in Flanders by capturing Hazebrouck railway junction. Meanwhile, smaller operations would distract and throw back the French, rendering them unable to aid the British and leaving their flank open for an eventual march on Paris.

However, lofty as these goals were, in reality they were strategic failures. While Operation Michael was a great success, driving the British back in a huge breakthrough, it lacked any strategic objective, and Ludendorff failed to set any major objective until it was too late. He reinforced success, rather than strategic goals, and only set Amiens as an objective after a week of fighting. After two weeks the attack fizzled out as the Germans outpaced their supplies, and failed to follow up their attacks. A miniature version of Georg (Georgette) was then launched to try and keep the British off balance, resulting in the Battle of the Lys, which also ended in failure. In the end this lengthened German lines by 80km, in a weak salient with no true strategic value.

They also lost over 350,000 irreplaceable troops. These soldiers were the best of the best, selected for their fitness and professionalism. By the end of April, these men were gone. The elite stormtroopers were depleted, along with the reserves that were supposed to keep the subsequent offensives on track.

However, the Germans came within a hairsbreadth of forcing their way through to the vital rail line at Amiens. If the Germans had captured Amiens during Operation Michael, they would have been able to severely damage the British ability to supply their armies in the field, and put a significant chink in the Entente's ability to coordinate. Follow up operations could then inflict local defeats on the Entente forces, and maybe, just maybe, drive them to the negotiating table before summer, and the arrival of the American juggernaut.

Let us assume that Ludendorff manages to rush everything in to strengthen his right flank and manages to press on to Amiens, strengthening his lines so we end up with a situation roughly like this: 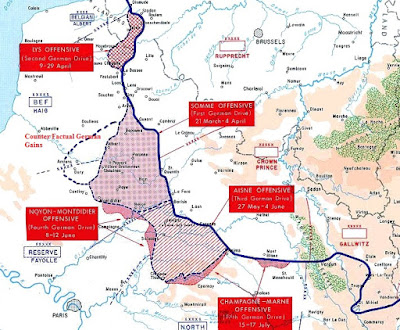 Amiens is in German hands, and the right is slightly more stable, with a definite wedge driven between the Entente armies, with Haig and the BEF divided along the Somme, and the French First Army on their flank. The railroads are in German hands but damaged, and they have suffered heavier casualties and failed to take Arras, which is well entrenched.

The Entente now must marshal for a counter offensive, but the Germans cannot hope to continue their planned spring offensives. Assuming they attempt to, they instead opt to fall into the defensive by June, rather than continuing to attack into July of 1918. Ludendorff informs the Kaiser they must seek negotiations, but not an armistice, while the Entente is unbalanced, lest they find themselves with nothing.

Recently, I had the absolute pleasure to finish a grand modern mystery novel, the Magpie Murders, by Anthony Horowitz. If you're pining for a dose of Agatha Christie, even long after she's dead, you'll find a dose of her writing here! Or at least, her clever style.

The book is actually, two mysteries in one. Inside you have the manuscript of a book called the Magpie Murders and a mystery actually taking place within the universe. A book within a book if you will. The story revolves primarily around the editor Susan Ryland, who must read what seems to be the penultimate novel in the best selling Atticus Pünd series by Alan Conway. However, as she delves into this final mystery, she discovers an apparent mystery of her own which needs solving.


Magpie Murders manages to capture that quintessential feeling of old English thrillers. From the use of quirky little mannerisms of small town English life, the foreign detective trying to fit into English society, or the complex web of interweaving motivations and red herrings which keep you guessing till the end. Thankfully though, although it owes a note of inspiration to Poirot, it sets itself apart. It is set in the 1950s for one, and captures the post-war feel rather well.

The nods to Agatha Christie are there, from Pünd having a well meaning but inept assistant based on a lover, to characters based (often unflattering) on people who the (fictional) author knew. Some of this comes off as a great homage, and not a little bit of gentle ribbing against the genre in general.

It is this aspect of the book that falls on the shoulders of poor Susan Ryland!

She is a quirky character. She offers some running commentary on the book within the book, the genre, and how things never quite work out like they do in these novels. Unfortunately for her, she has to put up with how obnoxious and rude Alan Conway actually is, and his behavior seems only to be getting worse as things begin to take a dark turn. Sadly, she finds she may be in way over her head.

Filled with witty commentary, fun dialogue, and the darker side of humanity Magpie Murders is a gripping read. There's twists and turns that, like any good mystery novel, will keep you guessing to the end.

Now of course, were I to go on much more, there would be spoilers galore. So I'll avoid that. However, if you want to enjoy a great whodunnit novel, Magpie Murders is the book for you!

Posted by Stienberg at 14:07 No comments:

Prepare for a controversial article!

As a response to my friend Barloq's excellent article "Waiting for Superman" I am writing my own  opinion on why I'm not fond of the character.

As a kid I grew up with Superman. He was a fun Saturday morning cartoon character, and was usually involved in a simplistic right vs. wrong narrative that was easily digestible to a children's narrative. It was enjoyable, but not something I seriously kept up with in my teens. Sure I watched the superb animated series Justice League Unlimited but I've never read the comics or taken a serious look at his mythos.

From what I have seen though, Superman is the biggest villain of all time.